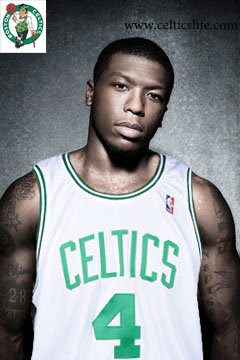 
BOSTON -- The Boston Celtics announced today that the club has acquired guard Nate Robinson and forward Marcus Landry from the New York Knicks in exchange for guards Eddie House, J.R. Giddens and forward Bill Walker."Nate is one of the great athletes in the league and he brings a dynamic scorer to our team," said Danny Ainge, Celtics President of Basketball Operations. "We have been seeking a second ball handler capable of penetrating the defense and we believe that he provides that. We love Nate's ability to pressure the ball defensively and we think he can add to our defense as well as our offense."Robinson, a 5-foot-9 guard, is currently averaging 13.2 points, 2.4 rebounds and 3.7 assists in 24.4 minutes per game. The former Washington Husky is also shooting a career-high 45.2 percent from the field in 30 games this season. Robinson connected for a season-high 41 points against Atlanta on Jan. 1 to go along with six rebounds and eight assists. The product of Seattle is the only three-time Slam Dunk champion in NBA history after winning the 2010 Sprite Slam Dunk competition at All-Star Weekend on Feb. 13. Robinson has netted 20 or more points seven times this season.Landry, a 6-foot-7 forward, is averaging 2.6 points and 1.1 rebounds in 6.4 minutes per game this season. The former Wisconsin Badger was signed as an undrafted free agent by the Knicks on Sept. 24, 2009 and posted a season-high eight points against Indiana on January 3. Landry pulled down a season-high four rebounds against Dallas on Jan. 24."It is tough to see Eddie go," said Ainge. "He was one of my favorite players to watch and he was a key element in winning the 2008 championship and a tremendous presence in the locker room along with his son Jaelen. J.R. and Billy are two talented young players that haven't had much of an opportunity to play. We thank them for their commitment and wish them well."House, a 6-foot-1 guard, was averaging 7.2 points, 1.4 rebounds and 1.0 assist in 16.9 minutes per game at the time of the trade. House in the Celtics' franchise record holder for three-point field goal percentage in a single season when he shot 44.5 percent from beyond the arc during the 2008-09 season. In his time with the Celtics, the Arizona State alum posted averages of 7.8 points, 1.4 assists and shot 41.2 percent from beyond the arc. House posted a season-high 22 points against Chicago on October 30.Giddens, a 6-foot-5 guard, appeared in 21 games this season for the Celtics averaging 1.1 points and 1.0 rebound in 4.7 minutes per game. He registered season-highs of six points and seven rebounds against New Jersey on January 13. In four games on assignment for the Maine Red Claws of the NBA Development League this season he averaged 18.0 points, 4.5 rebounds, 3.0 assists and 1.0 steal in 31.8 minutes per game. During those four games the former New Mexico Lobo shot 64.4 percent from the field and 60.0 percent from three-point distance.Walker, a 6-foot-6 forward, appeared in eight games for the Celtics this season averaging 1.0 point in 3.7 minutes per game. The former Kansas State Wildcat was named the 2009 Boston Celtics Shamrock Foundation Community All-Star winner for the 2008-09 season for his outstanding work with Boston area charities. Walker appeared in nine games on assignment for the Maine Red Claws of the NBA Development League this season and averaged 17.4 points and 6.4 rebounds per game

You knew Eddie's days were limited ever since he broke Danny's 3-Point record. Best of luck Eddie!