Hello I'm Three_Toe, and welcome to my first installment of a blatant rip-off of Peter Griffin's "You know what really grinds my gears?" I incorporated two of the seven deadly sins into the title, so you may be going straight to hell if you read this, but who isn't, amiright? Anyways, never go on a trip unprepared, is what I always (never) say, so use this handy quiz to figure out what to pack for your own personal slice of hades. Also, as a disclaimer, this (and probably future) episode(s) contain(s) strong language, so if you don't like it, get a fucking life and stop forcing yourself to be offended by little things that don't even matter. :)

So if you are not Christian, you should have made it this far. Given the title, you need not ask, like

Dr. Evil, "Am I ill-tempered?" Well, Robert Wagner and I can assure you that "oh, absolutely" I am, and will be quite so, on every installment of The Wrathful Sloth. It should be fun times so please read on, especially if you work on NBA's Leaguepass Broadband service. First, let me start off with a quick questionnaire that will help you, the reader, decide whether or not to try Leaguepass Broadband (LPB, from now on).

Do you exist? If you answered yes to this, LPB is NOT for you.

Do like like watching basketball in lousy quality? Do you enjoy being disappointed on a regular basis? Do you hate quick and helpful customer service? Do you enjoy overpaying for things or being charged without your permission? Are you a card-carrying masochist? If you answered yes to these questions, then sign up for LPB without delay.

Now I know one must exist to answer yes to any of those above questions, but if you don't like paradoxes than you can go divide by zero. The point is, i would only pay for leaguepass broadband if it was a prostitute, because it sucks in so many ways that it leaves your mind blown, and then it will still fuck you over.

Let's look at the facts:
1. It's programmed by the kids who hang out in front of Hot Topic at your local mall.

How do I know this? Well it just makes sense; who else could code so poorly and have a hatred for sports fans? I tell you it's Doug, who goes by "Broslayer, fallen angel of forlorn agony" in his closer circles of gothy friends, sitting in his parents' attic, long after high school has gotten out, going, "WUAHAHA those jocks are gonna have to go through this terrible menu system to even get the option of watching games! Random browser windows opening: check, buggy software with the power to crash one's computer or at the very least, the browser: check (bonus points if the user was typing something that gets erased), time-scrolling bar that doesn't line up chronologically with the game: check, and of course, the occasional inability to load anything, regardless of how good your internet connection is: check. My job here is done."

2. The NBA hates it's fans. AWFUL officiating, terrible marketing, and poor fan benefits aside (all possible fodder for later episodes of this blog series), LPB doesn't disappoint, if you love being disappointed (paradox #2!). This is me living in NYC last year and the year before: "Oh no, I won't be able to watch my favorite bball team, the Celtics, cause I'm stuck with either the New Jersey Trainwreck (please join me in petitioning the league to officially change the Net's name to that name until they break 300. 30%, that is) or the New York "We are a traveling 3-point contest" Knicks.

Wait a sec, I can watch the game on leaguepass broadband cause a) i was duped into thinking it was a good deal, or b) was charged for it without my permission because they still have my credit card on file and there is no way to cancel the service unless you already have it. Oh wait, it's blacked-out like every other potentially good game. Thanks LPB, I hate paying for reliability! You might be thinking, "why don't you just..." And before you finish, you CAN'T check ahead of time to see if the game will be blacked-out, that option simply doesn't exist. Now I have to go to a bar in Manhattan and convince some yankee-cap-wearing fatass to put on the game at his bar cause he has the expensive sports cable package. I love this option because instead of being able to hear the game, I get to listen to him and similar creatures, who are all one Journey song short of orgasming in their pants, telling me that "Posada could whip KG in a fight, dude, no question." Thanks guys, but I asked for my retardation on the side, not in my ears. Please take your Bud Lights and your ingrained obligation to sing "Don't stop believin'" whenever it comes on... and kill yourselves.

3. David Stern thinks he needs more money. I'm not sure if he thinks he's being clever and no one is noticing, but it should be obvious. I love basketball, but the NBA is an inferior product, 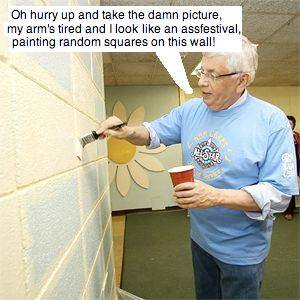 compared to the MLB, NHL and NFL. Regardless of this, there are no attempts at progress. Merchandise is still too much money, so are tickets, and the NBA Cares campaign is laughable in its intentions. Dwight Howard reads to kids, SEE WE ARE GIVING BACK TO THE COMMUNITY, OUR IMAGE IS STERLING!!!The NBA, where obvious bullshit happens all the damn time. You can't fund something meaningful, Stern, like making LPB work? I mean, I just find it odd that the few games I actually got to watch on LPB will skip and freeze during the game, but as soon as the ads come on, the picture is perfect, the sound is great and the playback couldn't be stopped by a lightning bolt hitting my computer. But then as soon as the game comes back on, it's like my internet connection is rerouted through Uganda before it gets to me, for maximum shitty-ness. (Sorry Uganda, maybe your internet infrastructure is great, I don't really know, all I know is that the game now looks like a flip-book being piloted by a drunk who has lost control of his thumbs).

4. Customer service is too expensive for the NBA. Tying to the above point, the NBA opted for no customer service for this product because either they are cheap bastards, or they figure there won't really be any customers to serve pretty soon. I tried to be nice to this crack squad of savvy personnel in my various emails, but as it turns out, they only respond to direct insults to themselves and their families. Upon infiltration of their offices, I snapped this picture of the LPB CS group, hard at work, and the one below it is the break room:

So anyways, a few months ago, I get this automated email saying "Hey, you will automatically be charged for NBA leaguepass broadband this season." As I learn that you cannot cancel the service before you pay for it, I am forced to contact this department of baboons, which of course ignore my several polite requests to explain how to cancel (not to mention my other questions about black-outs and other issues earlier) and that I did not want to be charged. After all, they are too busy picking flies off of each other and slinging feces to respond to emails. I get charged anyways and am pretty much forced to explain to them how and why they are bigger fuck-ups than the Hindenburg, and they proceed to explain to me how to cancel the account. Oh

gee thanks, Brainframe, but it's too late now, I have already overpaid by the exact amount I paid for the service, what a coincidence. And god help you if you are actually in the local market for your team. I am back in MA now and still have LPB, due to the above series of blunders and failures and can proudly say that all 6 Celtics games I've tried to watch were blacked-out. Can't get home to watch the games on T.V.? Simply want to watch your local team on the computer? Boy oh boy, we here at the NBA have absolutely NOTHING to offer you!

So if you haven't guessed by now, I've had some bad experiences with NBA Leaguepass Broadband. I think I will refer to it as 'NBA black-out assfuck tour-de-force' until they fix it. Good luck, baboons, you have your work cut out for you.