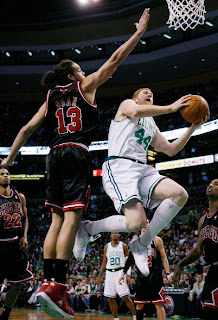 First off, I don't understand why anyone is surprised Boston lost this game.  The Celtics were missing 3 of their top 7 rotation players and were starting Brian Scalabrine(sorry Scal). On the other side, you had a Bulls team that has been coming together as of late, and wasn't missing anyone.  In fact, I'd argue that the Bulls are better(when healthy) this year than last year with Deng's resurgence.  So, someone please tell me why we had any business even being in this game?

That said, it was still a tough loss and a game that would've been a huge moral boost if we had won.  Rondo had his worst game in awhile, and Ray Allen looked tired and old. Pierce had his moments but the vets look unmotivated right now.  The fact is though, when you're a 12 year veteran these games in January before the All Star break are just not as big a deal as games in March and April.  As long as everyone is ready for the stretch run I'm okay with losing to a good Bulls team on a Thursday night in mid January.

Perk seems to get his shots blocked a lot.  I think he has more trouble with teams like the Bulls than the Magic because the Bulls are so athletic.  Big Baby should be starting over Scal.  As much as I love Scal for the energy guy he is, not to mention his fantastic dance moves, he's a liability on the defensive end and doesn't rebound well.  If he's not hitting that set three, which he hasn't for much of the year, he's not much of a factor.

The Bulls could be a scary Round 1 match up.  It looks like Deng has recovered from his injury and is back to being automatic from mid range.  Derrick Rose is back to his rookie form and even Joakim Noah doesn't look half bad.  Thankfully Vinny is still their coach which makes it virtually impossible for them to ever beat the Celtics in a 7 game series.

All in all not a surprising loss, but a game that would've been great to have.  Thankfully they have a few days off, then only 2 games next week.  Hopefully they can get people back healthy and piece together a nice win streak before the All Star break.