Big Baby should concentrate on his game not his nickname 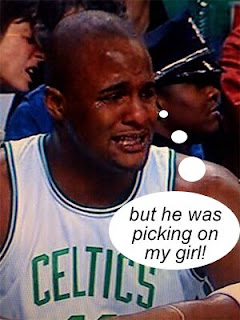 The quote above tells you a lot you need to know about Big Baby.  Look I know the nickname is all in fun, and I'd be interested to hear what readers think his new nickname should be.  Not to mention the fact that I think it would be hilarious to hear Tommy say it during the games. However, right now he should be concentrating on improving his game not his nickname.

At this point, Big Baby is a more suitable name for him.  First he had the incident with his best friend, breaking his thumb and missing the first quarter of the season. Then he curses out a fan last week.  Big Baby needs to get his mind back on basketball and become the player he was for us last year.  As an NBA player you have to know you are going to get heckled and you just have to deal with it.  Big Baby has shown that he is still immature and has not outgrown the nickname just yet.

With that said, I still love Big Baby's game. He's one of the best on the team in going after loose balls, and eventually that jumper will come back.  We need Davis to be an impact player off our bench to win the title. Think about how big of of a difference maker Leon Powe was for us in the playoffs a couple years ago(still miss Leon). It's these 8th or 9th guys off the bench that can decide a series.  Look, Davis is an emotional player and that is a good thing.  We just need him to buckle down and keep his focus on basketball.