Who Do You Hate More? 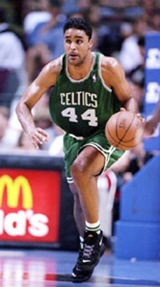 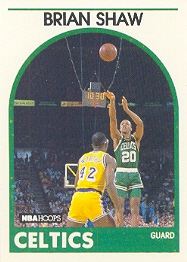 One of them was the C's point guard of the future.  I have him on a poster with Reggie Lewis, the two of them superimposed on the Garden with the title "Changing of the Guard."  The other was the first Celtic rookie to start a game since Larry Bird.  Not spectacular in any one area, but could be a key piece to the future.  They were the first round picks of the Celtics in 1988 and 1991 respectively.  So tell me who do you hate more, Brian Shaw or Rick Fox?

Shaw was the point guard for the 1991 team, one of my favorite Celtic teams of all time.  They began the year 29-5 with a terrific infusion of youth (Shaw, Lewis, Kevin Gamble and Dee Brown) and experience (Bird, McHale, Parish) and tough, scrappy guys (Derek Smith, Ed Pinckney).  I remember Shaw averaged 13 ppg that year and was on a t-shirt along with Lewis, Gamble and Brown titled "Zip Boys" that I owned.  His game dropped that year in the playoffs, one of the reasons the Celts were knocked out in the 2nd round by the Pistons.  He never seemed to play on that level again.  Jettisoned to Miami for Sherman Douglas, then playing for Orlando, Golden State, Philadelphia and one game with Portland, he was waived by the Blazers to join the enemy in 2000.  The fact he hit those big shots vs the Blazers in Game 7 that year with the Lakers was painful enough.  The fact the Blazers waived him to keep guys like Greg Anthony and Bonzi Wells and Stacey Augmon was still the right call.  Shaw wasn't better than any of them.

But then he won 2 more titles with the Lakers the following 2 seasons and now sits next to Whistling Phil on his high chair on the Lakers bench.  I seriously hate him.

Who's the biggest jackass in this photo?
Ulrich Fox (that's his real name I swear) signed with the Lakers after 6 seasons with the Celtics.  When the Evil Emperor took over in the summer of 1997, the C's didn't pick up his contract.  He also won those 3 titles with the Lakers and for a long time was probably the only professional athlete with a more famous wife, until she dumped his sorry ass.  When the C's faced them in the 2008 Finals, he even admitted he was more of a Laker than a Celtic.  Hence I'm glad he was booed by the Celtic fans- he deserved to be.
As far as I'm concerned this is still my favorite moment of Rick Fox:
So who do you hate more?  Personally I detest them both.  If they went to San Antonio and won a title I wouldn't have cared (I actually was happy for Gary Payton and Antoine Walker in Miami).  If they went somewhere and had a successful career like Chauncey Billups or Joe Johnson my only regret would have been losing them.  But they went to our enemy and won championships at our expense.