KG and the Beast lead Celtics to fourth straight victory 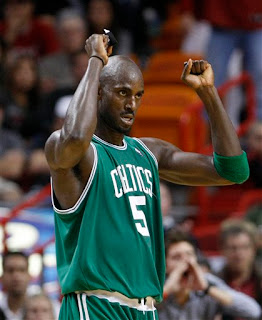 Tonight's 92-85 victory over the Heat was the biggest win for the Celtics since opening night at Cleveland. The struggles of the Celtics as of late have been well documented, and they needed a solid road victory against a tough Miami team to finish off the month of November. It wasn't just that the Celtics won this game, but how they won it. They looked like the Celtics of old, dominating the last half of the 4th quarter, especially on the defensive side of the ball.


Besides not being able to stop Beasley in the 3rd quarter, I thought the Celtics played great defensively. It's clear to me now that Kendrick Perkins should be on the NBA All Defensive team. When he was out of the game the Heat were able to drive into the lane at will. He is the anchor of this Celtics defense and deserves to be recognized as such.

With Pierce and Allen struggling, KG picked up the slack on offense. He continued his torrid shooting, going 11-12 and scoring 24 points. He also hit the biggest shot of the game, an 18 footer to put the Heat away. While he might not be the same player defensively, his jumper looks as good as ever. I thought Rondo also had a solid game for Boston with 13 points and 11 assists. I hope he continues to look to score more because there is no one in the league that can stay in front of him.
The only negatives I took out of this game were the refereeing and the lack of playing time for the Celtics reserves. I'm not one to call out the refs, but some of the calls tonight were ridiculous. Basketball is the hardest sport to referee, but that is no excuse. I think that Stern has to take a closer look at how to curb this disturbing trend.

The lack of playing time for the reserves still has me concerned. Sure, tonight's game was a big game, but I still worry the Celtics are playing their starters too much too early. The Marquis Daniels situation is still confusing to me. I've seen and heard only good things about him, yet he never gets more than 20 minutes on the floor.

Two quick comments about this Heat team. One, Dwayne Wade is a joy to watch and is in my opinion more skilled than Lebron, and maybe even Kobe. The Dwayne Wade sweepstakes should be every bit as hyped as the Lebron one, if not more so. Also, it pained me to see Mario Chalmers out there on the floor while the player we picked above him, J.R Giddens, was planted on the end of the Celtics bench. To this day I can't figure out the logic behind that pick.

It was truly a great win for the Celtics and great way to start this stretch of road games. The Celtics will win the title this year if they play the way they played in that 4th quarter. Team defense and clutch shooting wins titles, so let's hope it continues!