What the Hell Happened to...Dave Popson? 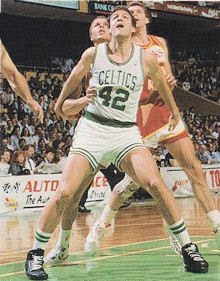 You may remember him sitting on the Celtics bench during the 1991 season.  The guy barely got in.  Hopefully you didn't get him confused with Michael Smith.  Smith if you recall, was supposed to be able to play, which he couldn't.  Popson was lucky he was in the league.

After putting up bigtime numbers at Bishop O'Reilly HS in PA, Dave made the McDonalds All American Team.  His talent lead him to a standout career at UNC where he played with Michael Jordan and Kenny Smith.

He was drafted in the 4th round of the 1987 draft by the Pistons but he didn't start in the NBA.  Two days after being selected (same number of days it took Brett Szabo to pack his bags) and Dave was on a flight to Monaco.  He'd excel in the French league.


There were some contract issues in the NBA at the time.  The money in Europe was good so I went after it.


Dave would make his way to the NBA but only played a career total of 41 games, including a career high 19 with the Celtics in 1991.  That '91 Celts team was very good, one of the best teams in franchise history not to win it all.  There were lots of blowouts so that's why he got some run.  After short stints with the Clippers, and Heat and one final stop in Milwaukee, he was out of the league, having averaged 1.9 ppg for his career.  He never got to play in a playoff game.

Back in 2002 Dave was working for Raymoor and Flannigan furniture in Wilkes Barre, PA.  They have nice furniture.  I actually bought my couch from there.  Their corporate office appears to be in Liverpool, NY so he must've worked at an actual store location.  Today, Dave lives in Ashley, PA.  In fact if you want to mail him for an autograph, his address is:
Dave Popson
82 Fall St
Ashley, PA 18706-2709

*Addendum: 5/5/11- Many thanks to Celticslife poster Jason below, for informing us that Dave works as a

Staff Coordinator at SCI Retreat in Hunlock Creek, PA.  This is close to the area Dave grew up.  As Dave himself says:

Basketball afforded me the luxury to travel and see the world.  But there's no place like home.

***Also a big thanks to Mark Hostutler and his terrific book Heads of State: Pennsylvania's Greatest High School Basketball Players of the Modern Era.  If you have some time, pick it up, it's an outstanding read.  Without his book, there's no quotes from Dave!