What the Hell Happened to...Adrian Griffin?

When I first saw Adrian Griffin play I was psyched.  Here was an undersized small forward with a knack for the ball and a knack for defense.  His first month in the league with the C's in 1999-2000 he was named Rookie of the Month.  He was a combination of ML Carr and Kevin Gamble.  He was tough and the Celts needed toughness back then.  And then, the Association figured him out. 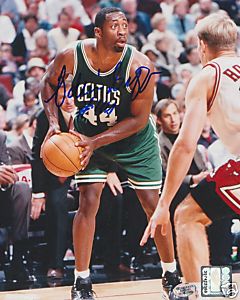 He bounced around from team to team in traditional journeyman style finishing with a career scoring average of 4 ppg.  He played for the Bulls, Rockets, Mavs, Sonics and Bucks.  He even started some back on the 2006 Mavs that made the NBA Finals.

Anyways he's now an assistant coach with the Bucks.

I've always been astounded on how some rookies play very well in the very beginning of their careers- whether in the summer league, the pre-season, or even the start of the regular season.  Then scouts figure them out.  Some of them very quickly.  And poof!  Their careers are done.  Sort of like Adrian Griffin.

And by the way.  Anyone else think Adrian should've bought this URL to not cause any confusion lol? http://www.adriangriffin.com/

Addendum: September 13, 2010: Adrian is now an Assistant Coach with the Chicago Bulls along with Ed Pinckney

Addendum II: 7/9/11:  Adrian has decided to leave the Bulls.  He would like to spend more time with his family, his wife Audrey and their 4 children: Vanessa, Alan, Aubrey and Adrian Jr.  However, he says:

"I always felt like I had a calling in my life in ministry," Griffin said. "I grew up in the church. My father taught me so much."

So at some point in time we may see the Rev.Adrian Griffin!