The Quickest Trigger in the League 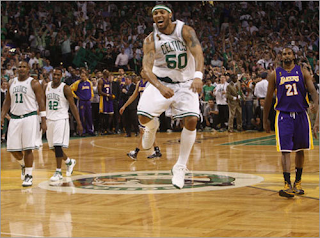 Good article today by Bob Ryan in the Globe on Eddie House finding a home in Boston. Ainge:


“Eddie can shoot as well as anybody in the game. He’s right there with a Ray Allen, that kind of guy. But he’s not as big, so he doesn’t get his shot off as easily. But no one has a quicker trigger.’’


According to the article, Ainge has been a fan of Eddie's going back to his Arizona State days when Ainge was playing and coaching in Phoenix. Both Doc and Ainge call Eddie a "scary" shooter in this article, which I think is right on the money. Honestly I have more confidence that a shot is going in when Eddie shoots than anyone in the league right now. Eddie will never be a star or even a starter. Shooting guards just over 6 feet tall never are (well unless they're named A.I. I guess), but Eddie is indispensable to the C's bench, and often I'm critical of Danny's moves, but bringing Eddie aboard (and keeping him) deserves a tip of the cap. Expect a very big year from Eddie.