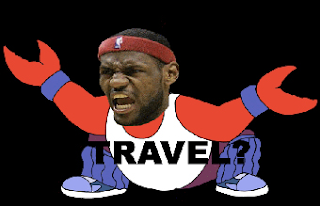 The NBA has changed its traveling rule from 1 to 2 steps. ESPN


The new rule reads, in part "A player who receives the ball while he is progressing or upon completion of a dribble, may take two steps in coming to a stop, passing or shooting the ball."

It is believed to be the first time any league, at any level anywhere in the world, has explicitly allowed two steps.


Is this at all because of that crybaby Lebron and his crab dribble? I hope not. And now that he might have the swine flu, I think they should at least call a foul on him if he gives the swine flu to an opponent. How many fouls were called on him last playoffs? Like 3? Never understood why all batters have the same strike zone in baseball, but different NBA players have different sets of rules. I hope the NBA realizes now that they're "allowing" 2 steps, players are going to take 3. They'll call it "2 and a half." Eventually dribbling will become extinct.