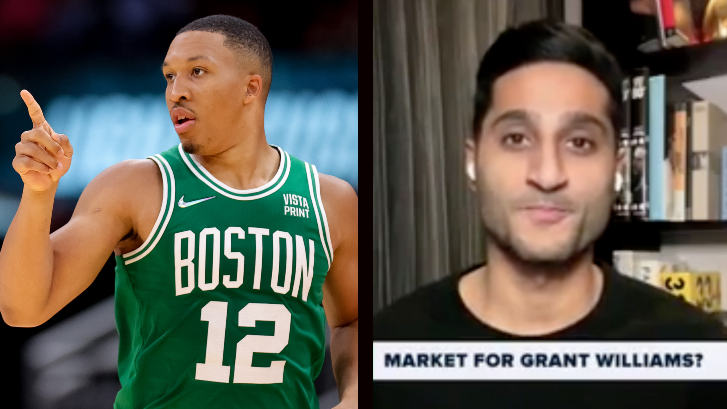 The Boston Celtics were unable to sign Grant Williams to an extension prior to this season. This was disappointing for most fans as the sides weren't far apart and there was a decent size risk that if Williams ended up a free agent another team would sign him to even more than he was asking for in the fall of 2022.

Shams Charania's prediction of a $15 to $17 million dollar range this summer seems realistic. I'd say it's a bit conservative even. I could see a team going over $17 mil. In terms of teams with cap space that could be interested, Charania name drops the Thunder, Magic, and Pacers.

Just 2 months ago, Forbes had the Suns valued at $2.7 billion. Celtics were valued at $4 billion. Wouldn't be surprised if BOS's value is now north of $5 billion.

Current ownership purchased the Celtics for $360 million in 2002. Not a bad investment

if you're in the camp that $15 million is too much to pay Williams remember three things. One, the Suns just sold for $4 billion. The Celtics ownership group has made billions owning the team. Paying a key 6th or 7th man a few more million has no negative effect on their lives.

And three, new massive TV and streaming deals are in the pipeline. With those deals will come much larger player contracts. A $15 million dollar salary in a couple years might very well be similar to a $10 million salary right now.

As I've written previously, it was risky and foolish not to re-sign Grant before the season. Only way the Celtics gamble would pay off is if Grant regressed this season. As a fan, that's a lose lose gamble. There are no guarantees in sports. The Celtics look good this year, but winning a championship is not easy. So you need to have a contending team that will have sustained success for many years.

With that in mind, you can't just let Grant walk for nothing, but the idea of trading him prior to the deadline is giving me post traumatic Kendrick Perkins trade flashbacks. Don't expect a trade.

With that in mind, I hope the Celtics just pay Williams this summer. The Celtics had a very good team when they let Rodney Rogers walk and then they fell apart. They had a championship team when they let James Posey walk, and haven't won since. In both those cases, if you wanted to carry water for ownership at least one could argue that those players were old and wouldn't be as good the final year or two of their contracts. Grant Williams is 24. Re-sign the man this summer.