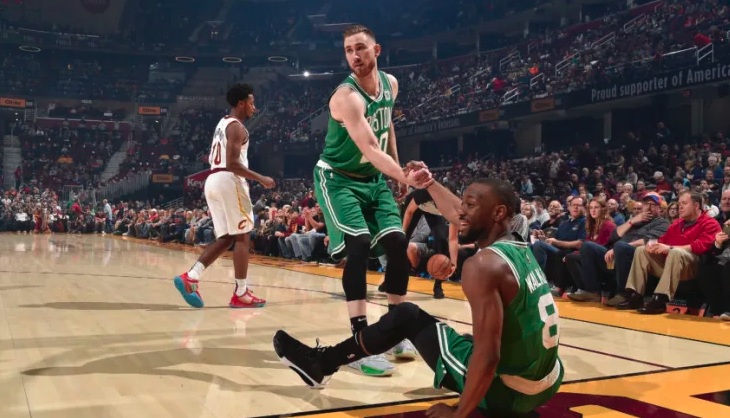 A couple of former Celtics are in the news as Gordon Hayward is sidelined once again and Kemba Walker is set to get another chance.

Mark Cuban to me on addition of Kemba Walker:

“We wanted to add some flexibility to our offense. Like last year at this point, we have great shot quality, particularly from the 3, but we have struggled to make enough of them. Kemba will give J-Kidd more offensive flexibility.”

Sources: Charlotte’s Gordon Hayward will be sidelined indefinitely due to a fracture in his left shoulder. Hornets expect Hayward to miss time and he is undergoing further evaluations.

The Mavs are a solid fit for Kemba Walker. Similar to Isaiah Thomas, the key for Walker will be is he able to provide enough offense to offset the defensive hit his team will take for playing him. Walker isn't expected to play heavy minutes, so his knee shouldn't really be an issue there.

As for Gordon Hayward, I don't know what one can really say at this point. The man just can't stay healthy. Hayward's wife Robyn claims the Hornets knew about this injury and let him play anyway and that's why it got to this point.

Gordon Hayward and Kemba Walker were two of the biggest Celtics signings in free agency in team history. It's easy to Monday morning quarterback, but at the time, Hayward was a huge get. He was a young All-Star with an ironman history in terms of being healthy. He got severely injured in his first game as a Celtic, and injuries have haunted him ever since.

Walker was also an ironman in terms of games played, prior to the Celtics signing him in 2019. Unlike Hayward though, Walker had had some recent issues with his knee. The Walker signing completed a string of poor moves by then President of Basketball Operations Danny Ainge in regards to the point guard position.

Ainge wisely was unwilling to back up the brinks truck for the undersized and injured Isaiah Thomas, but he foolishly traded his last Nets pick with Thomas and Jae Crowder for Kyrie Irving, who was unhappy playing for championships with LeBron James in Cleveland.

The Celtics had just hit #3 and #1 in consecutive drafts with Nets picks and ended up with Jaylen Brown and Jayson Tatum due to this. The pick they traded to the Cavs luckily didn't end up top 3 (Luka Doncic was in this draft) but still ended up high enough in the lottery that the Celtics missed out on the opportunity to draft Shai Gilgeous-Alexander.

According to multiple sources SGA is the player Ainge would have selected if he had retained that pick. Then Irving was a sh#t show in Boston and when he decided to walk, instead of retaining their other point guard Terry Rozier and letting him and Marcus Smart man the position, Ainge decided to sign Walker. To sign Kemba to a max deal, Boston had to let both Rozier and Al Horford walk.

Ironically as his first move as the new President of Basketball Operations in 2021, Brad Stevens unloaded Kemba Walker by attaching the team's 2021 first round pick (The talented Alperen Sengun was selected with that pick) for Al Horford in a trade.

Walker was bought out by the Thunder and struggled in his one season back home in New York. The Knicks traded Walker and draft assets to Detroit on draft day this past offseason in order to free up cap space to sign Jalen Brunson.

Undersized point guards like Kemba Walker and Isaiah Thomas have had a hard time getting playing time in the modern NBA as the game has changed. Everyone it seems can shoot a solid percentage from 3-point land now, while teams want guards who can switch and defend multiple positions.

In the past, you'd try and hide a guy like Thomas or Walker on defense, by just putting them on a lesser offensive guard. In today's game with all the switching, that doesn't work. Walker was an All-Star as recently as the 2019/20 season and is still only 32, so this seems like a decent gamble for the Mavs.

Dallas has long needed more scoring to surround Doncic with. Walker can play when Doncic needs a blow, and due to Luka's height, you can play the two together. Here's hoping that things work out for Walker, as by all accounts his teammates loved him in Boston. If we had gotten the Hornets' version of Kemba, we very likely win that 2020 Bubble title.

As for Hayward, the man took less money to go to the Celtics than he was being offered to remain with the Jazz. He was a very unselfish player who NBA players actually voted a top 5 teammate in the whole league his final season in Boston. Celtics fans were unfairly harsh to him in my opinion.

He actually left his wife while she was about to give birth to their son to try and help the Celtics in the Eastern Conference Finals, despite being extremely limited to injury.

Danny Ainge reportedly turned down a sign-and-trade deal of Hayward to the Pacers for Myles Turner, Doug McDermott, and a 1st round pick, and when Montrezl Harrell surprisingly rejected a very lucrative long term deal to sign for peanuts with the Lakers, the Hornets had more cap space to increase their offer to Gordon. But after a strong start in Charlotte, Hayward has spent as much time off the floor as on it.

Hayward at 32 still should be able to provide a team with some solid seasons... if he can ever remain healthy.