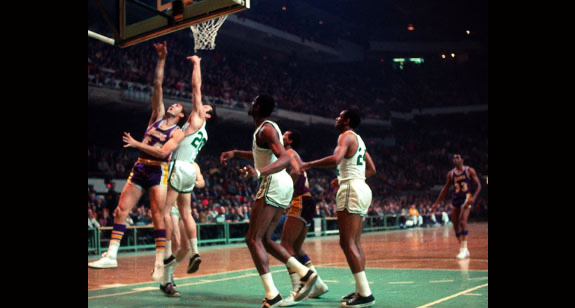 There are some truly legendary NBA players who continue to be recognized for their greatness, years after their retirement. Additionally, there are unfortunately some iconic players who are remembered for the wrong reasons.

Jerry West falls into both these categories. Lakers fans remember his incredible play, tremendous accolades and humble attitude towards the game. Many other people, particularly Celtics fans, remember his not-so-impressive finals record and contradictory finals MVP. We take a look at this basketball icon in the article below and delve into his NBA Finals record and appearances.

West played in a time when factors like NBA 1st quarter totals stats and advanced game stats weren’t as prevalent. He played his entire career for the Los Angeles Lakers and has been in every NBA Greatest anniversary team to date (35th, 50th and 75th). Some of his most notable accolades include:

Add to that a scoring title and assist title, and you have one of the most versatile two-way point guards of all time. He was a joy to watch and known for his lightning-fast jump shot release, elite play-making skills and clutch performances.

If, at the time when West played, records had been kept for things like steals, he would undoubtedly have been in the top 10 steal leaders of all time, as this was a major part of his defensive prowess. Such is the renown of Jerry West that he is indeed the NBA Logo – the iconic white player stencil was based on West and is the reason why his nickname is The Logo.

Despite these incredible accolades, Jerry West is unfortunately known for two other current NBA records. Firstly, he is the only player – on the losing team – ever to win a finals MVP .

That’s right. There have been 54 finals MVP trophies awarded since its introduction in 1696, and only one player has won it when his team didn’t win. This was Jerry West, and interestingly enough, it was the inaugural finals MVP trophy!

The 1969 NBA Finals were between archrivals the Celtics and Lakers, and the Celtics eventually won 4-3. There were some brilliant individual performances in this series from the Celtics and many people argue that John Havlicek or Bill Russell should have won the award. Indeed, Havlicek had 28.3ppg, 11prg and 4.4apg, while Russel had a ridiculous 21.1rpg.

However, it was quite difficult to dismiss the individual performance of West. He did everything he could to take the Lakers to victory and finished with averages of 37.9ppg, 4.7rpg and 7.4apg. He was easily the best Laker on the team, even with the likes of Wilt Chamberlain and Elgin Baylor. We guess that his performance, despite being on the losing team, was just too good to ignore.

Add the fact that it was the first finals MVP ever to be awarded and it is easy to see why this record still stands, and to date, he remains the only person on a losing team to win it . We don’t see this ever being repeated, as the award is now given to the best player on the winning team.

His second record is much less flattering and tied to his finals record. Jerry West played in nine NBA Finals – and lost eight. That means he has the worst NBA Finals record of all time, at 1-8. This includes six losses at the hands of Bill Russell and the Celtics, two losses against the New York Knicks and one victory against the Knicks.  West could never get past the Celtics and it would be incredibly interesting to see how this record would have changed if he had played in a different era. Despite this 1-8 losing record, no one can deny the abilities he had, the greatness he showed and how he carried himself night after night on the court. The seven previous losses before he finally won his first and only NBA title made it that much sweeter too.

Despite being such a phenomenal player, his horrendous finals record often overshadows what West achieved. This is a trend we see with other players too – the most notable of whom is currently LeBron James. People will forever compare Michael Jordan’s perfect 6-0 finals appearances to LeBron’s current 4-6 record, much to his detriment. Whether this is right or wrong, well, that’s a whole other debate!