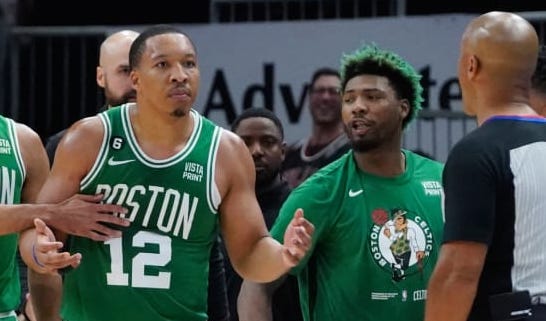 Boston Celtics forward Grant Williams has been suspended one game for his role in ejection Monday night vs. Bulls.

The NBA announced that Celtics forward Grant Williams has been suspended one game for making contact with a referee.

Williams will serve his suspension on Friday night when the #Cavs play in Boston.

Pretty standard to get a suspension when a player makes contact with a ref. There was some hope, since Williams didn't intend to make contact, that the ejection would suffice as punishment for the NBA, but that didn't end up being the case. Williams reaction to being ejected likely didn't help his cause.

In other news, Joe Mazzulla's 2nd technical foul that he received in the Bulls game, which which led to the coach's ejection, has been rescinded by the NBA.

Per source, the second technical foul Celtics coach Joe Mazzulla received in Monday's loss to the Bulls has been rescinded by the NBA.
Removes the fine for the second tech and ejection.

In addition to removing the fine, getting a technical rescinded helps in terms of a player's total tally of technicals in a season. When you reach a certain threshold you have to serve a suspension. Not sure if coaches have that threshold rule in place or not.

The free throws that were made due to said rescinded technicals aren't erased though.