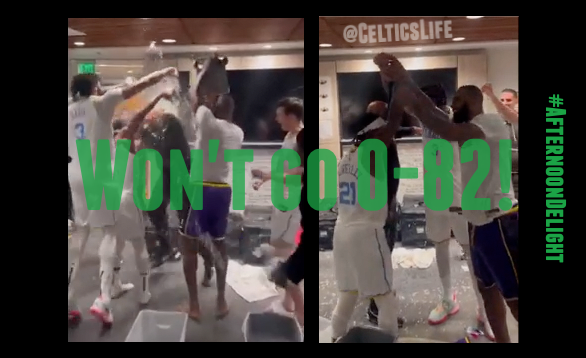 Huge night for the Boston Celtics rivals the Los Angeles Lakers last night as their fears of going 0-82 on the season were finally put to rest. Check out their post game celebration where they celebrate winning a championship game.

Longtime Celtics Life Afternoon Delight lead reporter Rondo Burgundy caught up with Lakers general manager LeBron James to ask him about the moment. James had this to say:

"A lot of us were having nightmares about going 0-82. We had made (former head coach) Frank Vogel the scape goat for us sucking the past two years, so it was a bad look if the new coach I hired Darvin didn't win a single game this season. Now we can go back to losing without the pressure of having this monkey (not winning a single game) on our back. "


Sure, the tanking superstar less Spurs and Jazz have won a combined 10 games and we've only won 1, but it's not my fault! I forced the team to give up a ton of assets so that I could play with another All-NBA player in Anthony Davis, since it's proven that's the only way I have a shot at a championship, but he's no longer All-NBA! I told Pelinka 'Swap him for Giannis!' but he told me you can't just do that.

And then Russ, yeah I demanded a third star and we gave up our remaining assets for him, but he was supposed to be like a Ray Allen or Kevin Love for me and hang out in the corner and hit 3's. How was I supposed to know that wasn't his game. He makes a solid scape goat though.

In the end this season is all about our team goal of me passing Kareem on the NBA All-Time points scored list, so now that we don't have the annoying distraction of having to win a game, we can all focus more on this as a squad."