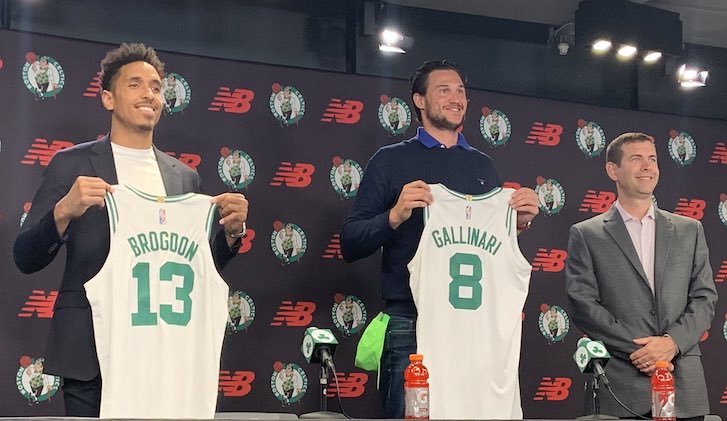 It's press conference day for the newest Boston Celtics Malcolm Brogdon and Danilo Gallinari and everyone is saying all the right things. Brogdon just wants to win and has no problem coming off the bench, while Gallinari says it's always been a dream to play for Boston.

Brogdon will go with #13 and Gallinari with #8.

Brogdon on playing with Smart: "Bringing me here actually helps him. I’m gonna push Marcus. I’m gonna embrace him, he’s gonna embrace me. I really think he and I will play well together. We have different skill sets, but we both want to win so bad it doesn’t matter."

"You take your ego out of it"

Danilo Gallinari says that winning a championship is "a constant, constant thought that I have every day."

He adds that after joining the Celtics, "It’s that time for me."

Danilo Gallinari on playing in TD Garden: "I think about it. I have dreams about it." pic.twitter.com/BI0qfOKopw

“We are thrilled to welcome Danilo to Boston”,said President of Basketball Operations,Brad Stevens.“With his elite shooting abilities,he has long been established as of the league’s best scorers with size.” pic.twitter.com/urEQloT4ld

Brad Stevens on conversations he had with Marcus Smart after trading for Malcolm Brogdon pic.twitter.com/breKVSUmkM