Persistence pays off for Bucks as C’s squander Game Five 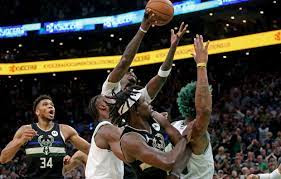 One out of every five Milwaukee Buck Field Goal Attempts (19 out of 92) in their 110-107 come-from-behind victory over our Men in Green Wednesday night was a “Second-Chance” Opportunity, coming on the heels of an Offensive Rebound – for the second consecutive game, Coach Bud’s boys secured possession of not one but TWO of their own Missed Free Throws, the latter producing Bobby Portis’s winning bucket.
The Celtics, while accurate (6-for-7) on extra opportunities, were out-rebounded by a three-to-one ratio (21-7, including “significant” Team Rebounds) on the Offensive Glass.
As Pat Riley once put it to his Showtime Lakers, “No Rebounds, No Rings”!
For the series, Milwaukee holds a 71-51 edge in Second Chance Points … not to mention an 88-65 advantage in Points-off-Turnovers.
The Celtics let the legendarily “pivotal” Game Five slip away in Q4 despite posting their most accurate FG shooting of the series (.512) – a whopping .676 (25-for-37) “in the Paint.”
In the 1974 NBA Finals, after dropping a heart-breaking 2OT Game Six at the old Garden to a KAJ-led Buck battalion, Celtic coaches Tommy Heinsohn and John Killilea re-vamped their defensive scheme for Game Seven by swarming Kareem – Dave Cowens’s game-high 28 points led the way to a relatively easy 15-point win to secure Banner No. 12.
Let’s see what Ime Udoka has in store for the Greek Freak Friday night, huh???
Abacus Revelation for the Road
Through five games (by my count), Boston has converted 230 of its 485 scoring opportunities (.474), Milwaukee 237 of its 481 (.493).