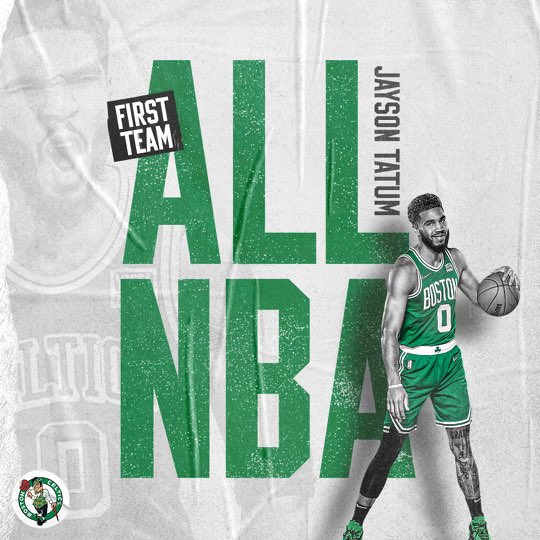 One area where the Celtics have struggled in since way back in their glory days of the 1980's is having an MVP talent on their team. Len Bias was supposed to take the mantle from Larry Bird, but he tragically passed. So for the past few decades the Celtics have been absent from MVP and All-NBA 1st Team conversations.

When the Celtics traded for Kevin Garnett they finally had an MVP talent on their team and KG did in fact make that All-NBA 1st Team his first year in Boston. Sadly he tore his knee up in his second season and that was it for the peak of KG's career. Now 14 years later, Boston finally has another 1st Team selection in Jayson Tatum.

Tatum joins Devin Booker, Luka Doncic, Giannis ntetokounmpo, and the league's MVP Nikola Jokic on the 1st Team (All three teams listed below). In the past 36 years, not coincidentally the Celtics lone NBA title came in that 2008 season where we had a 1st Team All-NBA player. Expectations are high that the Celtics can finally make it back to the NBA Finals after a twelve year absence and potentially win a title for the first time in fourteen years.

The last time the Celtics made the NBA Finals was in 2010 when Rajon Rondo, while not an All-NBA 1st Teamer, was arguably the best player in the league in the playoffs. The point is to make it to the Finals and win titles you need top of the league talent. We now have a guy in Deuce's dad.

Also while others can lament Tatum not making an All-NBA team last season and missing out on making more money each season of his new contract, if you're a Celtics fan that actually benefitted us a great deal. You add $5 million more to Tatum's yearly salary and we'd have a different roster this playoffs since Celtics ownership made it a priority to be under the luxury tax. Maybe no Derrick White or Daniel Theis.

And moving forward Tatum being paid less will continue to give him a stronger supporting cast. At the end of the day, I never feel bad for players who make tens of millions or owners who make billions when it comes to financial issues. Tatum and his family will still have generational wealth. And when Celtics ownership in the coming year hopefully goes into the luxury tax to retain key players and add to this team, I won't shed any tears on any of them not being able to buy a 17th house.

Congrats again to Jayson on putting in the work to join the league's elite. Now time to win a ring.