Yesterday the Celtics avenged their loss from right before the All-Star game versus the basement Detroit Pistons, but today Boston lost to the 20-41 Pacers. So that kind of takes a good amount of wind out of the Celtics sail. The Pacers Oshae Brissett led all scorers with 27 points, while newly acquired Tyrese Haliburton and Buddy Heild, as well as Malcom Brogdon each scored in the 20's as well.

Jayson Tatum led Boston with 24 points and Jaylen Brown had 23, but the former had one of his ugly shooting games. Tatum was just 2 for 12 on 3's. The Celtics big acquisition from the trade deadline continued to struggle from beyond the arc as well, shooting just 1 of 5 tonight. Most Celtics fans said they expected White to shoot better on his 3's as a Celtic than he did with the Spurs, but so far that hasn't happened.

Payton Pritchard continued with his hot shooting today off the bench, so I suppose that's a silver lining. And Robert Williams had another double double. The Celtics played without Al Horford, while the Pacers were without Myles Turner. The Pacers owned both the 2nd and 4th quarters and that was the difference in the game.

Indiana improves to 21-41 on the season, while Boston falls to 36-27. The Celtics will open up a 3 game home stand on Tuesday by hosting the Atlanta Hawks. 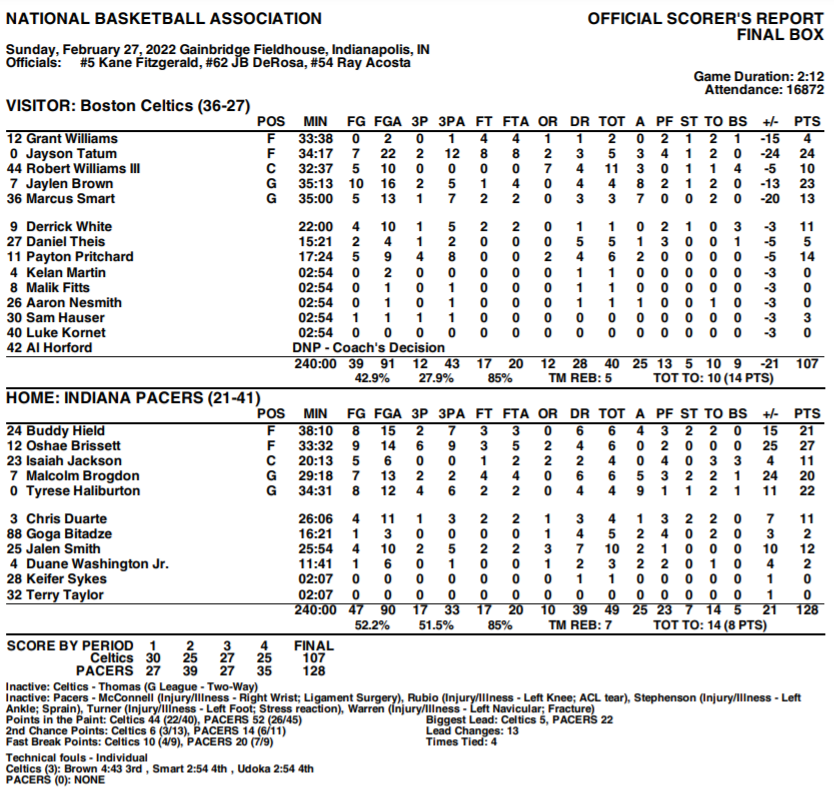