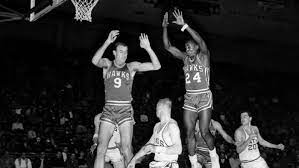 From the time Ben Kerner moved his itinerant Hawk franchise to St. Louis in the summer of 1955 through their defeat in the ’61 Finals, the team had never finished a season more than six playoff wins away from a championship, reaching the final round on four occasions and winning the brass ring in 1958.

All that post-relocation success notwithstanding, “Fuzzy” Levane this very night became the seventh man to serve as bench coach for Red’s former boss, Kerner – and Hall of Famer Bob Pettit would become the eighth for the last six games of this disastrous (29-51) Hawk season. 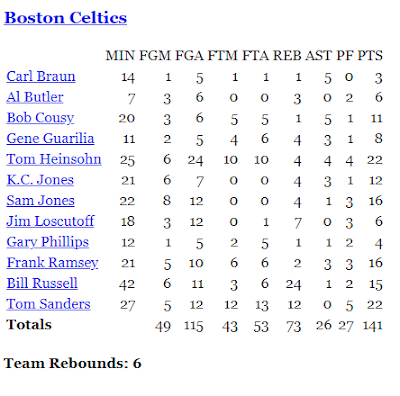 Celtic sophomore Tom “Satch” Sanders, already gaining a reputation as Boston’s “stopper” on defense, flaunted his offensive repertoire this Wednesday night, matching Tommy Heinsohn with a team-high 22 points … on half as many shots.
Collectively, the teams attempted NINETY-THREE Free Throws, Satch and Tommy-gun accounting for 23 of them. 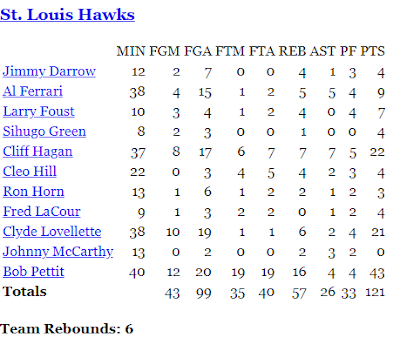 The Hawks’ impressive run of championship contention had been spearheaded by their powerful, Pettit-led front line managed by a heady, pass-first point guard, initially an aging Slater “Dugie” Martin, then a youthful Lenny Wilkins … that transition had been pretty smooth.

But a mandatory military commitment kept Wilkins sidelined through mid-January of the Hawks’ imploding season.
In anticipation of Lenny’s absence, Kerner and his personnel man Marty Blake (later, the NBA’s long-time Director of Scouting) used their No. 8 pick in the 1961 draft on a flashy, high-scoring guard out of Newark by way of Clarence “Big House” Gaines’s premier program at Winston-Salem State … the very same program that would soon be preparing a “Pearl” from Philadelphia for a Hall of Fame career.
Unfortunately – and despite an impressive 26-point debut against the Big O’s Royals – Cleo Hill’s one-season, 58-game tenure with St. Louis was a bust, 5.5 ppg on 35 percent shooting from the field.
Wilkins return in January couldn’t salvage the Hawks’ season, but they would right the ship, reaching four of the next six Division Finals before migrating to Atlanta.
Cleo Hill bounced around the regional leagues for several seasons before settling into coaching and social work in Orange, NJ. His son and namesake would go on to become Head Coach at his alma mater. Cleo was posthumously inducted into the College Basketball Hall of Fame in 2017.
Abacus Revelation for the Road
The NBA schedule could be particularly brutal in those days. Not only were the Hawks and C’s saddled with a late (9:15 pm) start to their game, each team was required to travel (to St. Louis and Philadelphia, respectively) and play tomorrow – which just happened to be Thanksgiving.
Indeed, the Hawks itinerary had them playing Wednesday, Thursday, Friday and Saturday … in Boston; St. Louis; Ft. Wayne, Ind; and St. Louis again. 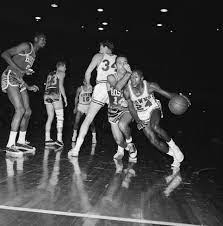