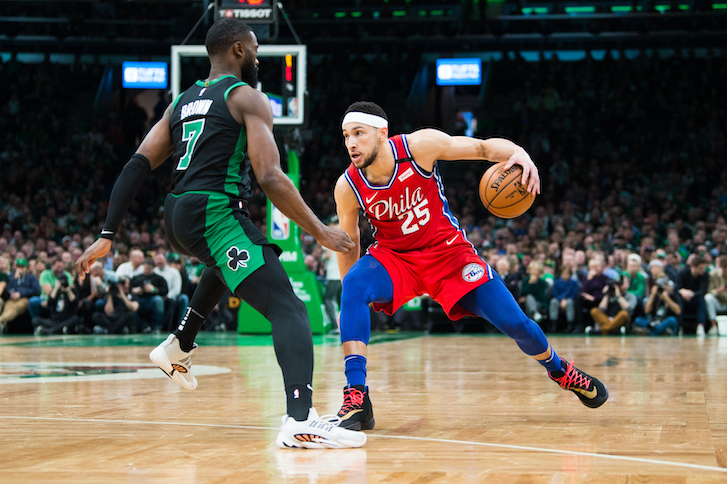 If you're a Philadelphia 76ers fan you woke up feeling pretty good today. Your team has the best record in the NBA, your coach just celebrated his 1000 NBA career head coaching win, and now you hear from Shams Charania about a possible Ben Simmons deal for Jaylen Brown. If you're a Celtics fan like we all are, you're shaking your head right now though.

“The Boston Celtics have engaged in conversations with the 76ers revolving around Simmons and expressed interest in the 6-foot-11 guard, sources tell The Athletic. Talks have been fluid with no traction as of yet, those sources say. Any potential Simmons deal with the Celtics would have to include All Star Jaylen Brown."

Wait, if Jaylen Brown would have to be involved, why are the talks still being labeled as "fluid"? Seems like these are talks that would go nowhere. Philly won't trade Simmons to Boston unless they get back either Jayson Tatum or Brown and Boston wouldn't trade either for Simmons.

If Boston were to trade Brown to Philly it would have to be the type of deal where multiple first rounders were coming back from the 76ers along with Simmons. But even then considering both Joel Embiid's and Jaylen's youth, wouldn't those picks all be very late firsts?

The thing is that Shams doesn't just pull stuff out of his arse, so I wouldn't just call this report BS. But due to the contract extensions Brad Stevens handed out this summer, there isn't a path to a Simmons trade with the Celtics that doesn't involve a Jay.

I'm not just going to put my hands over my ears and pretend this rumor has no legs. I do believe Stevens and the Celtics are considering a Simmons trade and they know that they'd have to part with Jaylen. We can only hope if this ends up happening that it becomes some complicated 3 or 4 team deal where Boston ends up another very good piece to go along with Simmons.

If Stevens were to trade Jaylen for Simmons straight up that would be a serious head scratcher. Jaylen based on his age and All-Star talent is the type of player you only trade if you're getting a player of the same age who's more talented and/or a better fit. He also makes a lot less than Simmons, which means Brown is more valuable.

Simmons would take up more cap space and to trade for him it would mean Boston would have to add contract to Jaylen to match his salary. Now if you've been reading this site for any length of time you know that I'm a fan of Simmons and love the idea of buying low on a talented asset. He was recently an All-NBA player and I think he'd be an ideal 3rd star next to the Jay's. But all my Simmons to Boston ideas involved adding him to the Jay's, not overpaying for him while losing one of the Jay's.

While most rumors never become actual NBA trades, I'm still going to prepare myself for a Jaylen plus contracts for Simmons swap, but I REALLY hope if it's the path that Stevens takes to remake this Celtics team that the extras we'd get in the deal would make it much more appealing than it appears now.

Seems like if Stevens thought the Jay's can't coexist well together since neither is a great playmaker, the wiser decision would have been to add a pass first point guard like Ricky Rubio to orchestrate the offense. He was available for more or less nothing this offseason. A Simmons, Smart, Tatum, and Time Lord core moving forward removes the issue of needing a playmaker and could give Jayson a scoring title, but it's a bit of an awkward mix.

If you go all-in on Simmons, you want 3 or 4 shooters on the court around him. Time Lord isn't a stretch big and Smart isn't a shooter. Anyway, we'll keep you posted on any more developments to this Shams report.