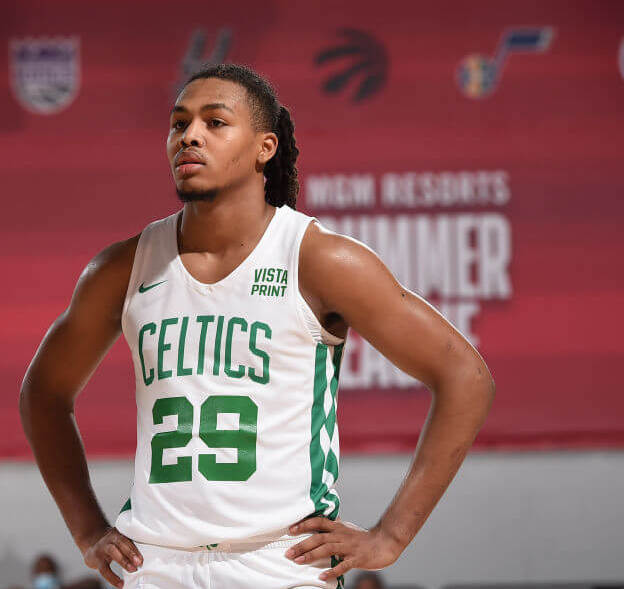 Brad Stevens only had one selection in the 2021 draft. He used the 45th pick on 18 year old international prospect Juhann Begarin. One thing to keep in mind with Stevens' offseason moves is the goal is to build a perennial championship contender.

Additions like Dennis Schroder, Josh Richardson, Al Horford, and Enes Kanter will get significantly more media exposure, but truth be told, none of them will likely be around when the Celtics next play for a NBA championship. Not unless that's happening this year. While it's true that "Anything is Possible," Stevens is banking on this season being the year for Boston.

It's a bridge year, where he's not punting on the season, but he's by no means going all out. Schroder and Richardson will most likely either be traded or their contract will expire next summer so Boston can use the cap space.

Stevens will continue to try and trade Horford til he finds a taker. In the mean time, Horford, like the other two players, will help this year's Celtics win games, but if Stevens could move the $44 million left of guaranteed money on Horford's contract today, he would. He will try again at the trade deadline and again next summer.

Guys like Kris Dunn and Bruno Fernando are only here because they make less money than the outgoing Tristan Thompson. Now could a guy like Richardson find a home in Boston and potentially re-sign next summer? Sure. But like with Evan Fournier, he won't be a priority. Getting a bigger fish is.

Juhann Begarin as a second rounder has his obstacles, but when the dust settles and Boston fields its 2022-23 and 2023-24 roster, out of all of Brad's offseason additions, he has the greatest chance to be wearing Celtics green. Not only because the other players will likely be gone, but because of Begarin showed this summer.

It would be wise to not get attached to the current Celtics roster https://t.co/cXtdALNSld

The cliche line is "Summer League is for showing who doesn't belong in the NBA, not who belongs." The theory is if a player like Yabusele can't even look productive in Summer League, he definitely won't in the NBA. This is true. But the idea that strong performances in summer league mean little more than "hey this guy at least showed us he doesn't notbelong in the NBA potentially.

While there are cases where a great shooter might put up big numbers in the summer league, but it not translate to the regular season (See Carsen Edwards in 2019 for a local example), you can at least moderately judge a prospect by his Summer League performance.

We already knew Begarin was a tremendous athlete, but between the steals, assists, rebounds, hustle, and his shot, the kid has all the potential in the world to at least be a rotation player on the Celtics down the road aka when they will have their championship roster.

Begarin will play another year overseas, but if he works on what the Celtics tell him to work on he's the cost controlled, young, small money contracts that winning teams need to balance out their roster. You can't pay Tatum the max, Jaylen $28 million, Smart $20 million, AND another guy huge money (let's say Beal) without either surrounding them with several tiny contracts or paying a large luxury tax bill.

We have pretty good owners, but they are not the type to pay whatever luxury tax is needed. They want to win, but in more of a Money Ball way. If they are going to pay the tax again, like they did back in the KG era, it won't be some huge number over.

So it's imperative Boston develop, cheap, young, rotation players. Think the 2007-08 champion Celtics. They needed young, inexpensive players like Rajon Rondo, Kendrick Perkins, Leon Powe, Tony Allen, and Glen Davis to compliment the big contracts of Pierce, Garnett, and Ray. Then they had to get lucky/ use the appeal of playing with former MVP KG, Pierce, and Ray, to add quality cheap vets like Posey and House. Once you're a favorite to win it then becomes a lot easier to add guys like PJ Brown and Sam Cassell after the trade deadline.

But the reality was the Big 3 on that team took up almost the entire payroll. I'm not sure how people can call the Dennis Schroder signing the best NBA move of the offseason. Sure he's underpaid this season, but he's a rental. Best case scenario he has a tremendous 1st half of the season, a contender loses their starting point guard to a major injury, and Stevens can trade Schroder for a 1st rounder at the deadline.

Again unlike Schroder, Richardson, Dunn, Horford, or Kanter the 1st rounder could actually end up being a long term player on Stevens' retooled Celtics team. Or a 1st rounder could be bundled with other assets (young players, 1st rounders) and a TPE to get a core player for the future.

The most significant additions Stevens had to make this offseason (if winning banners 18, 19, and 20 are what matters more to you than finishing let's say 4th instead of 8th in the standings for this year) were who he selected at #16 and #45 in the draft. They were the only players that would likely be around when the Celtics next played for a title.

I already gave my opinion that giving away #16 to facilitate the bad contracts swap of Kemba Walker and Al Horford was a mistake, so not going to rehash that. It did give added significance to the 45th pick. I'm glad Stevens picked a player who had the potential to be very good down the road as opposed to someone who had a better chance to contribute this season, but would be a fringe NBA player.

Begarin is the type of player that if he didn't enter this year's draft, I totally could have seen him being a 1st rounder in next year's draft. Some might protest and say, "Brad settled for another Romeo Langford. He's just like Danny!" First off, Romeo Langford still has a shot to be a productive NBA player. His story hasn't been completely written yet.

And secondly there's a huge difference between selecting similar players at #14 (where was Romeo was picked)and #45. Langford was projected to be selected around #14. If Begarin comps to a mid teens selection that's a very high value get for mid 2nd round.

It's up to Begarin to put in the work, but in my opinion the kid has a future in the NBA. And for that reason he likely could end up being Stevens' top addition of his first offseason.