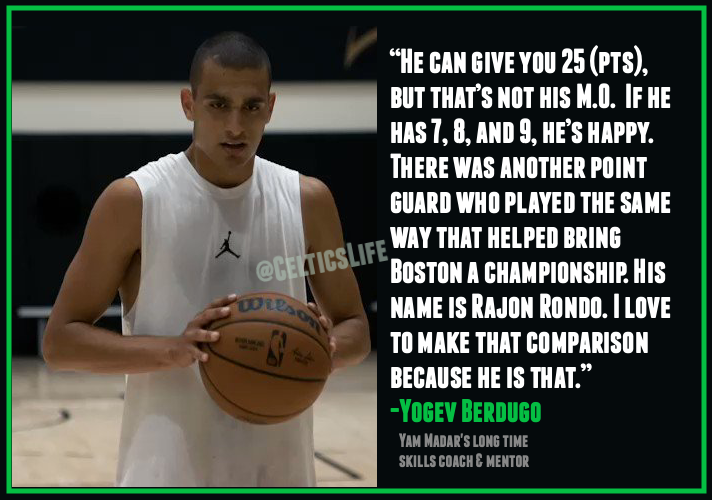 Could Danny Ainge's final draft selection be his parting gift to Celtics fans on par with one of his greatest selections from fifteen years back? According to Yam Madar's trainer since he was 12 years old, Yogev Berdugo, Rajon Rondo is who he sees in the Celtics young 2020 draftee.

“[Madar's] shot selection and decision-making are of the highest levels. He’s a high-level decision-maker. He makes brilliant decisions and takes great shots, which I think has attributed to his 3-point shooting.”

"Feisty and nasty on defense. A dog on defense. Very smart off the ball as well with reading passing lanes. He’s as exciting as can be.”

“He can give you 25 (points), but that’s not his M.O. If he has seven, eight and nine, he’s happy,” Berdugo said of Madar. “There was another point guard who played the same way that helped bring Boston a championship. His name is Rajon Rondo. I love to make that comparison because he is that.”

“He’s a competitor. He’s a winner. He plays to win the game. He’s not chasing stats; the stats chase him because he’s a winner. He’s a great team guy. He plays with soul and passion. He’s fun and entertaining. That’s Yam. I believe that he is going to captivate Celtics fans and NBA fans. I think Yam Madar was born to do this.” 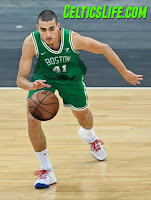 The Celtics are due for their first international draftee home run. They also are in need of a point guard. While Madar has been compared prior to Tony Parker, Rajon Rondo would certainly work as well.

With no first round selection in the upcoming draft, Celtics fans need someone to get hyped over. Yam Madar works for me. I suggest you just roll with it as well.