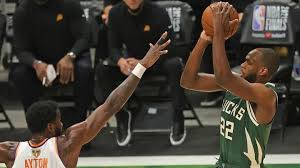 The crucial digits from the stats produced by Game 4 of the 2021 NBA Finals are “29” and “19” – and believe it or not, I’m NOT referring to the differential in Free Throw Attempts. (In truth, Milwaukee’s +10 in FTA’s was fattened up by the six freebies they were given intentionally in the game’s final 21 seconds, their final three possessions … and since Booker got away with his sixth foul unscathed, Coach Monty ought not to be griping about the “stripes”!) 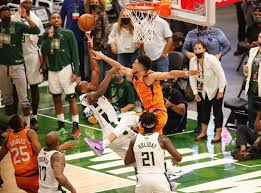 No, the 29-19 I’m talking about actually represents Field Goal Attempts, specifically in Q4, though like the foul shots, the advantage rests with the home team … equally impressive was the Bucks’ 18-8 Q4 stomping of the Suns on the glass (an 8-1 roasting in O-boards).
The Phoenix defense could manufacture but eight stops in 24 tries during the final 12 minutes, and for the game their offense contributed just five points off turnovers and went scoreless on the Fast Break (only one of their 78 FGA’s was dubbed “FB”).
[I’ve come up empty trying to identify the “specifics” that distinguish an official “Fast Break” from normal play. The “Gamebook” document from nba.com tallies FB points, FG’s and FGA’s, even labels the shots (both makes and misses) with an “FB” in the Play-by-Play – though you’re on your own figuring out which Free Throws produce the point total. Alas, Google’s been no help in resolving my dilemma???]