This is a matchup that very few expected, given the rough stretch the Wizards had to begin the season. They were in and out of the 15th seed for most of December and January, but started to make up some ground to end up in the 12 spot by the All-Star Game. Coming off of a bad season, this was almost expected of the Wizards; except for the fact that they continued to struggle even with the addition of Russell Westbrook. But, towards the middle of April, the Wizards went on a run that put the NBA on notice. This run included winning 17 of their last 23 games to help them finish at the highest seed they reached this season, the 8 seed. This was powered by the usual 31.4ppg from Bradley Beal, 22ppg triple-double from Russ, and a solid supporting cast. This, combined with the Celtics' season-long struggles leads us to a matchup that decides the 7 seed for the NBA Playoffs.

The Boston Celtics, led by Jayson Tatum, will host Bradley Beal and the Wizards for a "win and you're in" matchup on Tuesday, May 18 @ 9pm. The Celtics, who have dropped 5 of their last 6, come into this game severely short-handed.

Celtics say All-Star Jaylen Brown has been diagnosed with a torn ligament in his left wrist and is out for the remainder of the season.

Jaylen Brown's injury could not have come at a worse time for this Boston squad. Even though their season was extremely disappointing, you could bet they wanted to put all of their struggles behind them and try and make another run this postseason. But, that's not likely anymore. With Brown out, Kemba Walker will have to step up and be Jayson Tatum's right hand man. That leaves an interesting headline for a matchup: Jayson Tatum and Kemba Walker vs. Bradley Beal and Russell Westbrook. Let's take an in-depth look at this matchup, as well as the rest of their teams to see who has an advantage going into Tuesday's game.

Let's start with the franchise faces, shall we? Jayson Tatum vs. Bradley Beal: Two St. Louis natives going head-to-head trying to lead their team to the postseason. Looking purely at stats and 2021 season accolades, Beal has a slight advantage here. While the PPG numbers are close (31.4 v. 26.4 respectively), Beal's All-Star Starter nod puts it over the top for me. Also, his consistent 30+ point scoring is something that goes unnoticed bydar for most NBA fans; his scoring is the driving force behind the Wizards. Tatum has had a great year, improving in points, assists, and rebounds, and being selected as an All-Star for the second year in a row. Both are extremely talented players, but I give the edge to Beal here. Wizards 1, Celtics 0.

Next up, the two point guards: Kemba Walker and Russell Westbrook. Both Walker and Westbrook had rough starts to this season. Walker missed the first 11 games with an injury, and Russ' availability was cloudy as well. However, it's Westbrook's record-breaking performances in the second half of the season that gives the Wizards the edge here, too. Kemba's availability was of no help to him, only playing in 43 of 72 games.He's also having a down year in terms of statistics, with lower points and assists per night. Advantage: Wizards. this season. 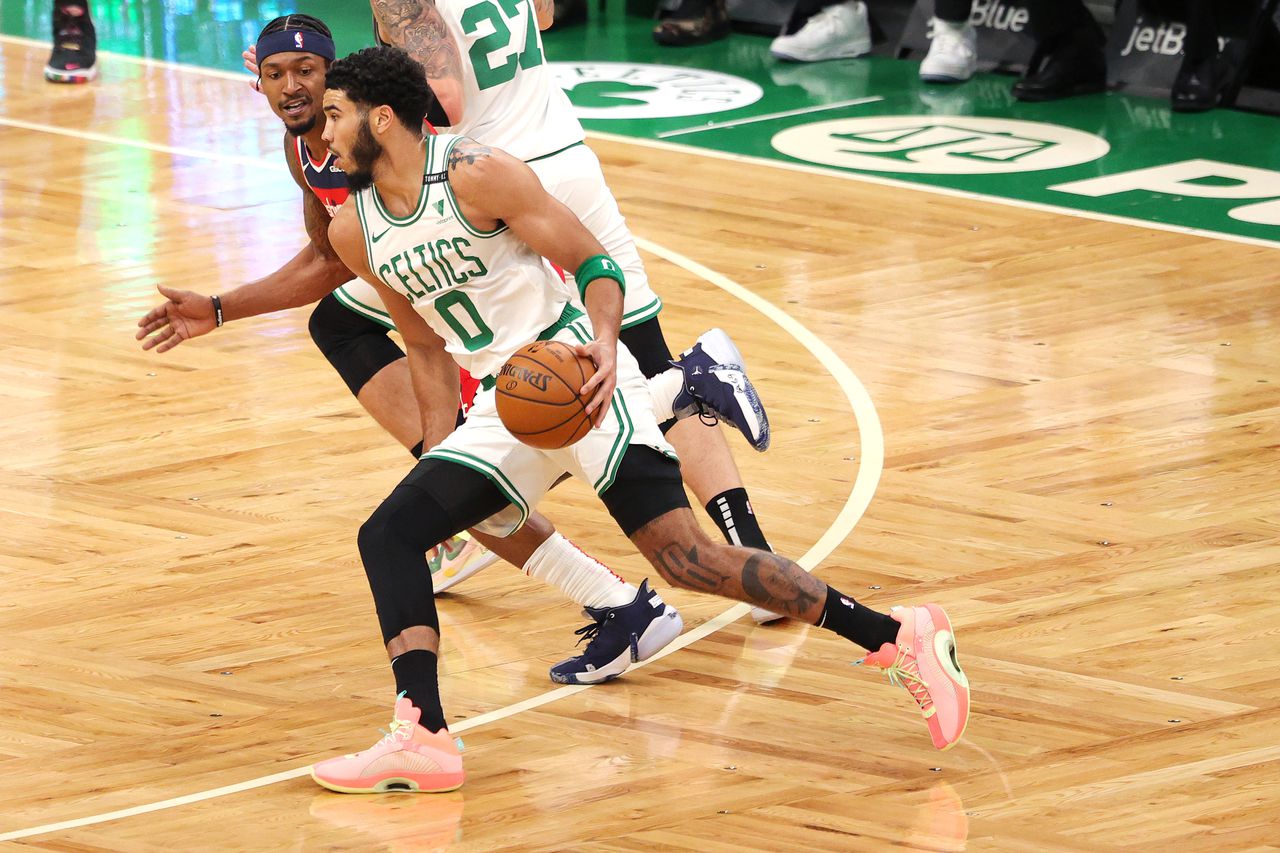 Moving on to the rest of the starters now. Because the Celtics had already clinched the 7 seed, they rested their top 7 guys against the Knicks on Sunday. That makes guessing the starting lineup more difficult, but not impossible. Rob Williams and Marcus Smart were both OUT on Sunday against the Knicks, but there is a good chance that Smart returns to the lineup on Tuesday night. Williams, however, might have to wait a little longer to make his return to the lineup, assuming the Celtics make the postseason. On the other hand, the Wizards played at full strength on Sunday against Charlotte to try and grab the 8 spot. So guessing their lineup should be relatively simple. I'd imagine these are the lineups that Brad Stevens and Scott Brooks put out on Tuesday:

Nothing different for Washington, and something pretty similar for the Celtics, since the Brown injury. Looking at the supporting cast for each team's two best players, I'm giving Boston the advantage here. Fournier has been contributing more than the streaky Bertans, Smart's defense and grit outweighs Hachimura, and Thompson is more experienced (and probably just better than overall than Len. Wizards 2, Celtics 1.

The Bench: With the Brown injury, the Celtics' bench is a little weaker than normal. But, the emergence of Payton Pritchard, Aaron Nesmith, as well as the impact(s) of Semi Ojeleye, Romeo Langford, Grant Williams, and more lead me to believe that Boston's bench is better than Washington's. Yes, Ish Smith, Daniel Gafford, and Raul Neto have been great, but I think that the youth of the Celtics' bench gives them the lift here. Wizards 2, Celtics 2.

And last (but certainly not least), we come to coaching. This is the only matchup that most people can pick between the easiest: Brad Stevens vs. Scott Brooks. It is worth mentioning that Brad Stevens has had a bit of a down year with his team, and Scott Brooks has the players to coach his team to a better record. But, the advantage has to go to Brad Stevens here. He is one of the best play designers in the NBA, his ATO plays are some of the best that you'll see. Coach Brooks is solid, but Stevens is one of the best. Celtics 3, Wizards 2.

After looking at each of the aspects that make the team who they are, the Celtics appear to have an advantage going into Tuesday's game. After all, there's a reason why they are the higher seed. But, with the injuries that the Celtics have sustained, and the narrative of poor play this season, does this matchup lean Washington's way? This is a question that only time can answer.