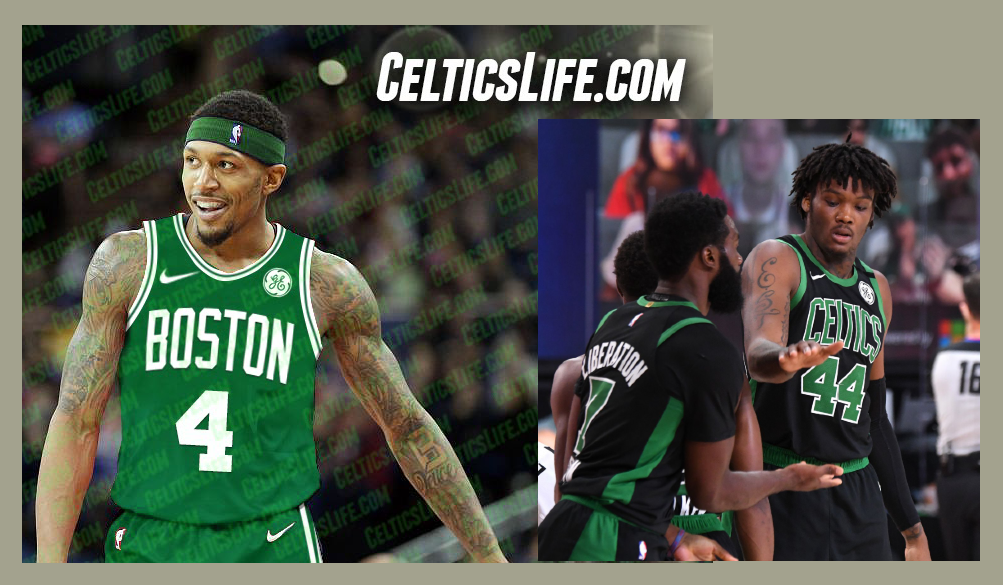 Jeff Goodman was on The DA SHOW on CBS Sports Radio this morning and proclaimed that the duo of Jayson Tatum and Jaylen Brown don't fit Brad Stevens' system. Goodman said that either Stevens needs to go or Boston needs to trade Jaylen Brown. Since Stevens appears to be returning, Goodman doubled down on a Jaylen Brown trade and said he should be traded to Washington for Tatum's "boy" Bradley Beal. Goodman said he'd include Time Lord to get the deal done. If you're a fan of this deal you're likely happy right now and I'd suggest you might want to stop reading here. Personally I think it's a hot take that's full of plenty of holes. I like Beal no doubt, but Goodman is thinking about a trade you'd make in a one year fantasy league, not a keeper league. Beal turns 28 in a month and is about to get a whopping contract that due to his service time will be considerably more than Jayson's Tatum's max. Beal will make more in his new deal than Jaylen Brown and Robert Williams combined. And similar to Kemba Walker, you will be paying Beal in his new contract for his seasons on the wrong side of 30 years old.

Goodman says that Beal works next to Tatum because the high scorer is a better passer. Well he should be, he's four years older. Goodman is assuming Brown won't improve as a playmaker. Jaylen's assists per game increased 62% this season and everyone says he's a hard-worker. To claim the 24 year old Brown has no more growth left in his game is naive. Not every All-Star wing comes into the NBA with LeBron James passing skills. Many first improve as scorers and then add playmaking to their games.

Not saying Jaylen will become Pippen! but Scottie at 24 as well after just solidifying himself as the #2 scorer for CHI took the next step w/ his passing game.

Jaylen for his part increased his assists per game by 62% this yr.

Another leap next yr would be huge for BOS

Time Lord's value in fans' eyes has resembled a roller coaster stock market month of late. He skyrocketed from exciting young player to starter to sure fire All-Star and now due to injuries, his stock seems lower than it should be. Mike Gorman who has seen quite a bit of basketball in his life sees him as an All-Star in short time. There are no guarantees on something like this, but honestly his ability to remain off the injury report will likely be the determining factor. It's worth noting that Bradley Beal was considered a guy who couldn't stay healthy his first years in the NBA. He responded with some stellar games played numbers the next few years, before missing some games again this year. With this trade, Ainge would be betting on Beals' health as he enters his 30's, to players who are just entering their mid 20's.

Goodman also says you can't trade Kemba Walker, because you'd only get "50 cents on the dollar." Well with Tatum, Beal, and Walker that would essentially be your cap. A player like Kemba Walker works best on a team as their #1 scorer. Adding the league leader in scoring in Bradley Beal (Curry might end up #1 and Beal #2 based on the Warriors' guard's final month, but still) to a very high scorer in Kemba, doesn't scream to be best fit. Reality is while overpaid what's done is done. Kemba can help a team, but his best role might be as your Manu Ginobili/Lou Williams type off the bench. The guy you bring in when you when you're resting Tatum and/or Brown.

If you want to trade Kemba Walker, there are trades to be had. It just mean that you are going to take back another overpaid player. Overpaid again doesn't mean bad. Would a team like the Minnesota Wolves desperate to finally make the playoffs and who wishes they could be a Celtics team that made the Eastern Conference Finals like Kemba's first year or finish 7th like this season have interest? Ricky Rubio is overpaid as well at $17 million, but a deal around him could be an option. Throw in a couple other contracts and maybe a pick coming Boston's way and you might have something. Also takes one team. No one thought Gordon Hayward or Al Horford would turn down their option years, because the assumption was no one would give them big money. Everyone was wrong on both.

And any team that trades for Walker, wouldn't be on the hook for four years at big money, but one or two (More likely the latter with him picking up his player option, but as we've seen in recent times that's no guarantee). One of the benefits of trading Walker instead of Jaylen is that you'd then have a bit more financial flexibility to keep your free agents or soon to be ones like Evan Fournier and Marcus Smart. And just as important you'd actually have the flexibility to a build a team that fits better together. Goodman's Kemba, Beal, Tatum threesome would suffer from the same flaw this team has had since Gordon Hayward walked aka Where's the playmaker?

If you don't trade Jaylen, who knows could increase his assists by 62% again this coming season, and a very good passing big in Time Lord for a super max Beal, you have the ability to try and add some actual playmakers to the team. Besides Rubio who wouldn't cost positive assets to acquire, Lonzo Ball is a young player who could fit tremendously next to the Jay's. If you don't have to pay Beal, adding a good passing big like John Collins could also help the team.

The point is there are many options beyond a hot take radio interview of saying trade a young all-star. If you want to keep Kemba, then fine. Trade Tristan, Jabari's non-guaranteed contract and Carsen Edwards for Rubio and add Collins as the big replacement. Boston either needs both Tatum and Brown to continue to grow as playmakers or to add a player like a Lonzo (or Rondo back in the day) to handle that role. Kemba is a scoring point guard. I keep coming back to Rubio since at 30 and with only 1 year left on his contract he could at least be a stop-gap measure. And I could also see Payton Pritchard benefitting from his tutelage. The Walker, Tatum, and Beal team would suffer the same ills as this year's team. I'd rather count on Jaylen improving, keep Time Lord, and add some new pieces like Lonzo, Collins, Rubio, etc who fix our deficiencies.

Again I like Beal, but Goodman is being a prisoner of the moment here. Also dismissing Brad Stevens as a coach who can't bounce back with Tatum and Brown is insulting. The man has coached three very different teams to Eastern Conference Finals, not to mention his accomplishments at Butler. I wouldn't bet on him not being able to make the tweaks necessary to make this team very good again. And I'm assuming Ainge is going to help make that happen as well. Ainge has admitted that the pieces he provided Brad this year weren't a great fit. He tried to fix things by adding a high scorer off the bench in Evan Fournier at the trade deadline, but he's had to be a starter because at least one of Kemba, Brown, Tatum, and Smart has missed every game Fournier has played in.

Trading Fournier was a solid move, but it was also negated some by losing Daniel Theis that day. Ainge was betting on not only Robert Williams and Tristan Thompson to be healthy every game, but also the latter to be as productive as Theis. He's not. The only chance this team had at the deadline was to not only trade for a Fournier, but retain Theis (have Tristan being the 3rd man out who only plays when Time Lord is hurt) and to also add a playmaker like Rajon Rondo. Fans wanted Isaiah Thomas, but he wouldn't have helped. The team needed a great passing point guard.

This offseason Ainge needs to add that great passer and the stars need to improve that part of the game. You trade Brown and Time Lord for Beal and then what happens when you don't win in 2021-22? You re-sign Beal to a super-max deal and pray that he doesn't get hurt like other older max free agent signings like Walker and Gordon Hayward. But you still don't have a team with playmakers. You got rid of your potential All-Star solid passing big in Time Lord. I've seen teams like this built before. The Nuggets added a veteran league leading scorer in Allen Iverson to their young big time scorer in Carmelo Anthony. That just made them worse. I'm not someone that's foot in the sand, "You can never trade (insert name here)!" It's just that Goodman's idea is a poor one. Jaylen and Time Lord for Doncic? Sure. For Giannis? Yup makes sense too. But trading for Beal is like if you traded Al Jefferson for Ray Allen in 2007. You'd have your Pierce and Ray, but that team doesn't go anywhere without the ability to trade Al Jefferson for KG. Garnett was the one that made that team a championship team.