Celtics lose to the Heat at home (again)

The Celtics played their first game on Tuesday night since they learned they'd be without Jaylen Brown for the rest of the season (including playoffs). Unfortunately the Heat shot the lights out (59.3% FG% and 53.3% 3P%) in a repeat of Sunday's first act and the Celtics were defeated 129 to 121. Boston could not or would not defend Miami from beyond the arc. Listening to the Celtics players after the game they seemed to be blaming their own defensive effort. So sounds more like the "would not."

Kemba Walker had 36 points on 27 shots. He is definitely back to the Kemba Walker he was in Charlotte. Unfortunately those Charlotte teams lost a lot. And so are the Celtics despite his impressive scorong numbers. Evan Fournier added an efficient 20 points and led Boston with 8 assists. Jayson Tatum had another big game with 33 points, 8 rebounds, and 6 assists. If all this sounds more like stats from a winning team, the problem was the rest of the squad.

Marcus Smart seems to be trying to be more a playmaker of late and his shot attempts have been low. He wasn't the issue. The issues were Boston got nothing from the center position and the bench once again. Tristan Thompson finally scored in the 4th quarter. He put up a whole 4 points in his 60 minutes of action versus the Heat the past few days. The Celtics big free agent signing in the offseason added a paltry 3 rebounds and 0 blocks and couldn't stop Bam Adebayo.

Unlike the Celtics who had three guys score the vast majority of their points, Miami finished with 6 players in double figures, with the lowest being Jimmy Butler with 13 points due to him leaving the game having only played 17 minutes after an eye poke.

The fact that Kemba, Fournier, Tatum, & Smart have all but 4 of our points through almost 3 quarters is a bit disturbing.

Also while I am well aware that there is more to the game than scoring... (long time driver of that bus), Tristan needs to score more than 2 pts in 7 qtrs

When I tell you the bench gave the Celtics absolutely nothing this is not hyperbole. Like the tweet says above towards the end of the 3rd quarter the bench and starting center Tristan Thompson had combined for a whole 4 points. Eventually the Heat broke this open, but the Celtics made the final score more respectable with a run to end the game in garbage time. Aaron Nesmith and Payton Prithcard should be getting more shots throughout the game. Not sure if either even scored before the 4th quarter. Then again it's hard to score when you don't take any shots. Who's to blame for that? Selfish teammates? Poor coaching? The players themselves not taking the initative? Ainge building a team with unsatisfactory playmakers? Some combination of all these?

Brad right now: So Indiana University, any chance that $70 mil is still on the table? pic.twitter.com/MTDsSrOC8j

Kemba Walker on the #Celtics defense: "It's a pride thing. We all have to look in the mirror and ask ourselves, 'are we giving it every single thing we have on that end of the floor?' And to be honest, we not, not on every possession. That's all of us."

Start these two the rest of the way. https://t.co/XdUKOfwKJU

Tatum on the outlook for the rest of the season:

Myself and everyone in that locker room, we are still fighting. We still believe in one another.
We are just taking it one game at a time and that is what is most important.

'Fight until it’s over.' 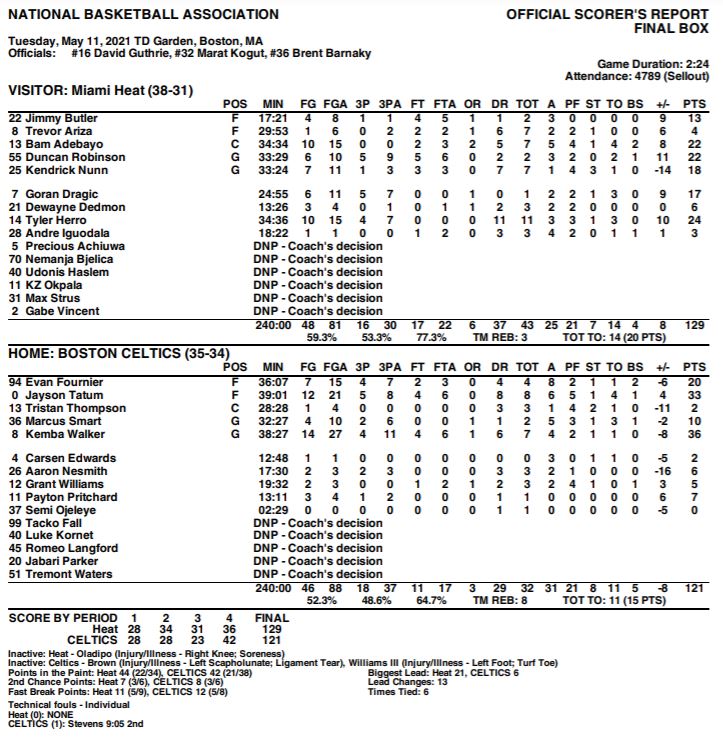 Celtics pretty much a lock to be playing in the #7 vs #8 play-in game (vs CHA, IND, or WAS). If BOS wins that, they move on to play either MIL or BRK in round 1 (very slight chance of PHI).

If BOS loses the #7 vs #8 game, they still get 1 more shot (game) for final playoff spot pic.twitter.com/AHZxJO80sG