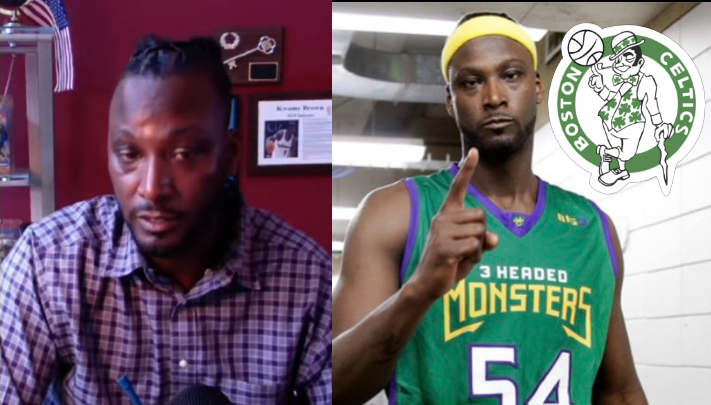 Well I didn't see this coming and when I first heard the rumor I wasn't even sure it was permitted by the NBA. I guess the NBA's loosened roster rules due to the COVID-19 pandemic gives teams the flexibility to add players to the play-off roster all the way until their first postseason game. And since the Celtics win over the Wizards featuring Jayson Tatum's 50 point explosion technically doesn't count as the postseason, Danny Ainge used that leeway to add another big.

Hopefully the signing of Kwame Brown by the Boston Celtic isn't a sign that Robert Williams' Surf & Turf toe injury isn't more serious. CelticsLife lead investigative reporter Rondo Burgundy was able to confirm with 3 sources that Kwame will be in a Celtics uniform for Game 1 vs Brooklyn on Saturday. The addition of Kwame will provide the Celtics with another big in case Time Lord is sidelined. Currently Boston has Tristan Thompson, but after that you're left with Luke Kornet who's more of a shooting guard with the height of a center. Then you have Tacko who Brad doesn't seem to want to play rotation minutes yet and the undersized bigs inGrant Williams and Semi Ojeleye.

While Kwame never lived up to the high ceiling of a #1 overall pick, it's rather unfair that that is held against him. It's not like players have a say where they are picked. That's on front office personnel. The other area where players get unfairly, mercilessly criticized on are contracts. Like anyone criticizing the players would ever turn down a raise. "No sir, I don't believe I'm worth $18 an hour. I think a more modest raise to $10 would be preferred." If Kwame had been selected 10th instead of 1st, I believe he'd have a much different legacy.

Now why after all these years is the 39 year old Kwame Brown back in the news? Well he must have finally had enough of being a punch line for people that he burst back on the scene with a vengeance on Youtube to respond to the haters. And like Marcellus Wiley says, "Ain’t no fun when the rabbit got the gun!"

For background, the tipping point seemed to be when Stephen Jackson and Matt Barnes had Gilbert Arenas on their podcast and the three of them made fun of Kwame (who was a teammate of Arenas in Washington). But when Kwame Brown started trending it wasn't just for these guys, he also went at Stephen A. Smith who had a famous moment of absoluting ripping Kwame Brown years back. Turns out Kwame was keeping score all these years.

Everyone should leave Kwame Brown alone. @cthagod explains why 😳pic.twitter.com/j4HNiLEukh

Not going to post all the back and forth videos from Kwame, Matt Barnes, and the rest of the parties involved, since one, there are too many, and two, they are very NSFW, but I'm sure you can find them with a simple search, but the one thing I've taken from all of this is Kwame Brown is not the one to be messed with. And Danny Ainge must be thinking the same. If Udonis Haslem can still be on the Heat roster a few weeks shy of his 41st birthday, then who am I to say the 39 year old Kwame Brown has no place in the league.

Let's be honest here, there wasn't much of a talent difference between Kwame Brown and guys like Haslem, Matt Barnes, or Stephen Jackson. Jackson had a higher peak for sure, but the only difference between Barnes and Brown was their draft selection. Barnes went 2nd round and Kwame first overall. So one player met or exceeded the expectations of a draft slot while the other didn't. Again at that time, NBA general managers were going crazy drafting high school kids hoping they'd become another Kobe Bryant or Kevin Garnett. 3 of the top 4 picks in Kwame's draft were high schoolers. So again, the pick was on Michael Jordan and the Wizards. It should never have been a permanent Scarlet letter on Kwame.

Who knows what Kwame will add to the Celtics for this postseason, but I've learned enough by now from following this Kwame story that if things get rough and tough, you want Brown fighting on your side. The fact that he's making grown men who have claimed to be tough guys back track and apologize, tells you there is a fear factor in play here.

Maybe guys like Harden, Durant, and Irving will think twice about taking it hard to the hoop while Kwame is on the floor for the Celtics. I mean Ainge was a teammate of Kevin McHale's when he clotheslined Kurt Rambis (Most likely would earn a lengthy suspension if this happened in 2021), so that might have been on Danny's mind as well. Or maybe Kwame has added a 3-point shot to his arsenal?

Kwame also recently took some credit for the Kobe Bryant 81 point game, flipping the narrative that all of Kobe's teammates at that time were garbage so he had to shoot that much. Brown correctly pointed out that he set some mean picks out there which contributes to scoring, but has no column on the stat sheet. So maybe this will lead to Jayson Tatum surpassing his recent 50 and 60 point games with a 70 or 80 point night? Welcome to Boston Kwame!