The Yankees’ Mariano Rivera and the Celtics’ Sam Jones: Talented and Graceful Champions with Timeless Humility 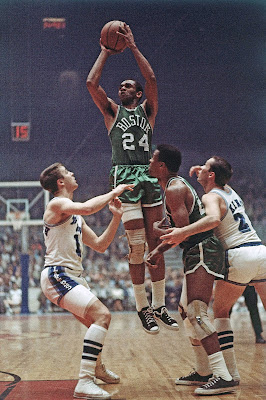 Guest post by Andy Lipton
Eight summers ago, on a very warm mid-summer’s night in July, in a comfy and homey CitiField ballpark, home of the New York Mets - the outside facade of which was meant to look like and evoke memories of the old Ebbets Field, home of the Brooklyn Dodgers, and the inside rotunda of which is a memorial to Jackie Robinson - number 42 came trotting in from the bullpen to pitch the top of the eighth inning. The American Leaguers were playing the National Leaguers in the 2013 All-Star Game.

His familiar gait, with black glove in right hand was as stirring as ever.

That night, Mariano Rivera was the only player in the majors to wear number 42 and the last player to ever wear that number. Major League Baseball, in tribute to the heroic and great ballplayer Jackie Robinson, retired the number 42 from the game of baseball a number of years ago. Jackie Robinson, who thrilled Dodger fans in Ebbets Field for many years, would have been proud of the moment that was about to unfold as Rivera took the mound.

And that moment seven and a half years ago reminded me then, that the good old days still existed.

This kid from Queens, who did not want to believe the years had crept up, was seeing the writing on the wall more often than not. Many people had started calling me Mr. Lipton then. That was my late dad’s name, not mine. And I knew I was not worthy of that appellation.

Secondly, young people had been offering me - and at least in one situation insisting I take, despite my protestation that it was not necessary – their seats in the subway and bus.

And when I asked my nephew, a young doctor whose wife was expecting, had he boned up on child rearing by reading Dr. Spock, he thought I was talking about the guy from Star Trek. Ugh!

But maybe it’s what I had been saying and thinking that is the true sign of being older - that things were better in the old days, and a longing for those days. Expressions I heard elders say through the years.

In the spring of 1969 at the ripe old age of 16, I witnessed what for me was the best and most emotional standing ovation in a sports arena I had ever seen. As a Yankees, football Giants, and Celtics fan, I had already seen more than my share of World Series, NBA Championship, and NFL title games during which I could root for my favorite teams. Heck, I was at the Stadium on Mickey Mantle Day in 1965.

It was an April afternoon in Boston Garden. Game 6 of the NBA Finals between the Celtics and the Lakers. The Celtics were down two games to three and facing a possible

season-ending game. It was Sam Jones’ last game in Boston Garden. He was retiring. If the Celtics won, game seven would be in Los Angeles.

In all of professional team sports in the United States, only Bill Russell and Henri Richard won more championships, 11. Yogi Berra of the New York Yankees, and Jean Beliveau of the Montreal Canadiens are the only other players to win ten. Jones played his entire 12-year career with the Celts. He is in the Hall of Fame. In 1996 Jones was named as one of the 50 greatest players in the history of the NBA.

Sam was one of the most graceful jump shooters of all time. Effortless. Beautiful to watch. And no player since his time could bank his outside jump shots like Jones. The ball went so sweetly and quickly off the glass, it was hard to tell sometimes that the shot was banked. And the shot never looked forced. Sam was a pure shooter before the phrase became part of the basketball lexicon. He showed that sport could be art.

And Sam Jones was clutch.

Four days earlier in Game 4, with the Celtics down two games to one and about to go down 3 to 1, they were down by a point with seven seconds to go. The Celtics in- bounded at half-court, running an old Ohio State play that Celtics’ and Buckeye alums John Havlicek and Larry Seigfried had convinced player-coach Bill Russell to install during the previous Knicks series, but had not been used.

Jones got the ball, dribbled behind a triple pick, and shot near the top of the key, which seemed to me a little further out from where he normally shot. The shot hit the top of the front of the rim, bounced off the back rim ever so gently and dropped through the hoop as the Celtics won the game. Frank Deford, “The Last Drop in the Bucket”, Sports Illustrated, May 12, 1969.

Add humility to greatness and you get a very, very special athlete. That was Sam Jones. Sam’s humility made him respected by opposing fans and players.

If you want a window into the soul of “Celtic Basketball” - an expression synonymous with team basketball and winning basketball - consider what Sam Jones said in the locker room right after the Celtics won a championship in the 1967-68 season.

“Tonight I am happy for Wayne (Embry) and Bailey (Howell)”, said Sam Jones the calmest of all the Celts except for possibly the iceman himself, John Havlicek. “They’ve been waiting 10 and nine [years] respectively”, Sam added. Leonard Lewin, New York Post, May 3, 1968.

“Number 24, out of North Carolina College, playing guard...” was the first Celtic introduced that spring afternoon in 1969.

Sam Jones stood on the court as a solitary figure, hands clasped behind his back, fidgeting, and anxiously waiting for the next player to be introduced, as the fans, his Celtic teammates, and the Lakers players, including Jerry West, Elgin Baylor, and Wilt Chamberlain were on their feet giving him a prolonged standing ovation that seemingly would not end.

It was the most touching standing ovation I had ever seen at that point. Frank Deford quoted Jones as saying he was “halfway between a smile and a tear.” Frank Deford, “The Last Drop in the Bucket”, Sports Illustrated, May 12, 1969.

“And Spring Became the Summer”

At the end of the truly amazing Summer of 1969, a summer in which the Miracle Mets showed they were for real and would go on to win its first World Series that Fall, when young people flocked to Woodstock for the concert of the century, and when the first man landed on the moon, a young man born in Brooklyn, Neil Diamond released his song Sweet Caroline. 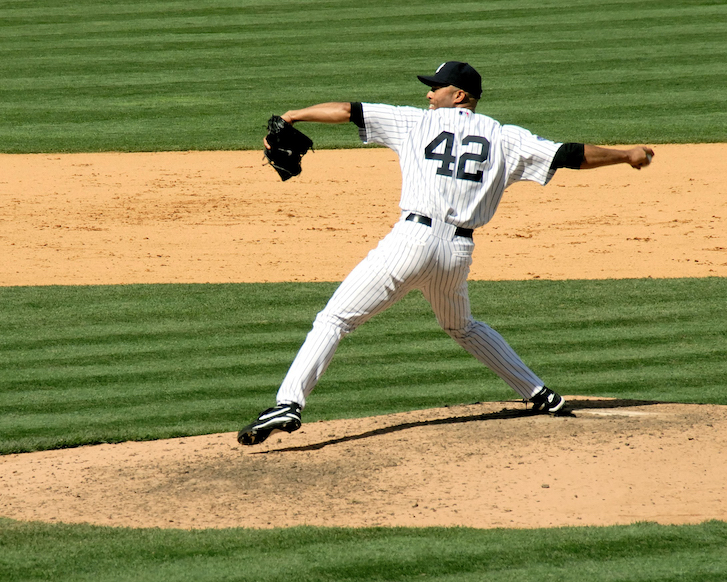 Forty-four years later, right before 43 year-old Mariano Rivera took off for the mound out of the bullpen at CitiField in the 2013 All-Star Game, Neil Diamond took the field to sing Sweet Caroline.

At the time of the All-Star game, the Boston Red Sox have been playing Sweet Caroline at its home games for over 10 years After the bombings at the Boston Marathon, many baseball stadiums in 2013 played that song in show of solidarity with the people of Boston.

Mariano Rivera had announced at the beginning of the 2013 baseball season that it would be his last. Six summers later, Rivera was inducted into the Hall of Fame, the first player by unanimous vote.

As Rivera took the mound seven and a half years ago, none of his teammates took their position except for the catcher. In a moment that reminded me of Sam Jones’ last game in Boston Garden, his American League teammates, the opposing National League team, Yankee fans, and fans of many different teams in the stands, rose to pay tribute to the greatest relief pitcher the game has ever known with an emotional standing ovation.

On the verge of tears, Rivera was caught off guard, but managed to wave his cap as he looked all around the ballpark. He later said he wasn’t sure what to do. He called the ovation priceless and other than the World Series, his greatest moment.

“Rivera was his usually humble self: 'I would like to thank God for this, my wife, my kids, my family, you guys, the fans, are the best. It's been a privilege, it almost made me cry. I cannot be more happy than that.’ ” Stephen M. Zorio, 2013 MLB All-Star Game Recap, aol.com

A winner of five championships with the Yankees and a 13-time All-Star, Rivera was the all-time toughest relief pitcher to hit against over an extended period of time.

Having spent his entire 19-year career with the Yankees, Rivera is the all-time leader in saves with 652.

He has been beyond clutch, almost automatic to save a game. I am not sure I ever saw an athlete perform so consistently at such a high level. Most hitters were overmatched. Mo would often strike out the side. He calmly worked under high stakes situations in the most impressive corner office - the pitching mound in the ninth inning.

"Rivera is definitively the best at his position by a wider margin than any player at any position in the history of baseball. There is Rivera, a gulf, and then every other closer." Tom Verducci, "Rivera's storied career may be over after suffering torn ACL in BP". SI.com. Time, Inc., May 4 2012.

Not since Sandy Koufax, who started his career with the Dodgers in Brooklyn’s Ebbets Field, has the simple act of throwing a small round ball ever looked more beautiful to me than when performed by Mariano Rivera. His free flowing body moves as gracefully, easily, and purely, while generating enormous force, as clear water flowing down a river.

And like Sam Jones, this talented and graceful athlete is also known for his humility. “For Rivera, who promotes the team concept above his personal accomplishments, the final out represented his belief that his teammates are an integral part of every save he has earned.” David Waldstein, "Rivera Notches Save No. 600 in Seattle as Yankees Win". The New York Times, Sept. 14, 2011

“But Then I Know it’s Growing Strong.”

The legendary sportscaster Howard Cosell often said that events in the sporting world transcend sports. The tribute paid to Mariano Riviera at CitiField was recognition of that rare combination of talent, grace, and humility embodied in a champion.

And to see the value of humility appreciated by opposing fans and rival players, and thus still time-honored, made me happy to know that the good old days were still here.

The importance of K.C. Jones to the game of basketball https://t.co/bARDlFiFeT pic.twitter.com/u5MyLgJrtx