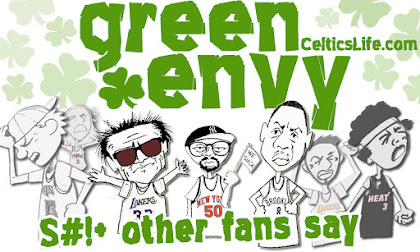 In this installment of Envy, we see a Boston Celtics team that almost fell victim to some old losing ways but instead feng shui'd those habits onto Nikola Jokic and the rest of the Nuggets en route to a 40-8 closing run. Yeah...40 to 8! Now the Nuggets were without Jamal Murray so they weren't at full strength but we as Celtics fans know that that wasn't going to guarantee anything in the way of a win. Nuggets fans of course had things to say, so let's hear em!
My stream froze when we were up 10+, when I fixed it we were losing...
Obviously we were missing Greg Whittington
More like Boston Leprechauns
Leprechauns
Man I love that word
I am once again asking for Zeke Nnaji to get playing time over Millsap.
Not going to lie, that 4th quarter really tempted me to break my sober streak. Hopefully we can bounce back for the Warriors lol. (Stay strong!)
I’m still in literal pain
Why don't we just play jokic off the bench? That would solve our bench issues. Then we'd have a starter issue but hey we'll deal with that later.
-...you're a GENIUS!
That was like super not chill
Damn bros, what happened in that 4th quarter?
-Green/Millsap lineups gonna Green/Millsap lineup
Bring back the cornrows AG.
So glad we have a back to back so I don’t have to listen to dogshit hot takes from you guys for two days lol
Should I still watch the replay I wonder or will I just be voluntarily hurting myself?
-Stop watching around 3 minutes left in the third quarter.
We're back to earth boys. Time for a new streak
-A new winning streak, you mean, right?
When you let your little brother finish your game of 2k
We need the braids back from AG
Headband AG: 7-0
Afro AG: 0-1 (Can't argue with statistics)
Wish I never watched that one. Almost feel scarred from it.
Hear me out: This is all Markus Howard's fault.
My Dad doesn't follow the Nuggets, but was over today helping me with a few things. I was raving about how fun the Nuggets are to watch this year and suggested we tune in after halftime. Big whoops.
Malone literally pulled defeat out of the jaws of victory on this one. I’m almost certain he had money on the Celtics seeing the way he treated that 4th quarter bench unit. If THIS isn’t all the evidence you need tor never having Paul and Green on the court at the same time I don’t know what is.
Also the Celtics put a curse on porter for these games this year. Won’t have to play them again thankfully.
MPJ’s three point shooting percentage this season:
Against the Celtics: 5.9%
Against any other team: 45.7%
8 points. Lmao. How can you go from playing so well to just forgetting how to play
Paul at -23 in 11 minutes is impressive.
Thankfully, this is the last time we play Boston
Gary Clark would not have let this happen
I had to miss the game today and I’m just going to pretend it doesn’t exist
Malone should ride in cargo on a flight tonight
Fucking idiot
How about Malone gets ejected in the first quarter of every game from now on. Unselds lineups were 100% better
I think we can beat Boston when we meet in the Finals. (I love the take to be honest)
This one hurts.
I think the appropriate response is to burn the franchise down. If they don't win every game like every other team in the league then what's the point?
This Jokic fella needs to be benched #startenstein
The good news is that since Porter went 1-12 from 3 he’ll likely make all 8 tomorrow
This must be how Clippers fans felt during Game 5 last year.
I fucking hate the Celtics (Wow that was rude lol)
Someone in the Celtics organization snuck in and replaced the left rim with one that was extra noisy, knowing the extra noise would throw our poor kid off by a mile all game.
Win 8 of 9 and y'all act like we're never gonna win again. (Have you met a fan of any sports team ever?)
Looks like sleeping in was the correct choice
Brad Stevens must live in Malones head at this point
If Malone is still coach tomorrow morning it's an absolute disgrace. Absolute spoofer. The John Fox of basketball, dining out off a GOAT and a great roster. Hopefully we find a Kubiak when we deservedly bin this idiot.
Can someone explain how players who played horribly on our team are playing well on other teams ? (Hey we Celtics fans feel this very often. We call it the Brad Stevens effect)
every time someone complains using the word rotations i throw up in my mouth a little
Jokic needs to throw a punch here pretty soon. You only get suspended for a max of 5 games. (Not if you punch a ref lmao)
Today was the first game of his career where MPJ has taken 20 or more
shots from the field. And he went 1/12 from 3. Pain :(
Follow me on Twitter for more of my mind! @Serendiptious or Instagram for more of my face! serendipity_maybe.