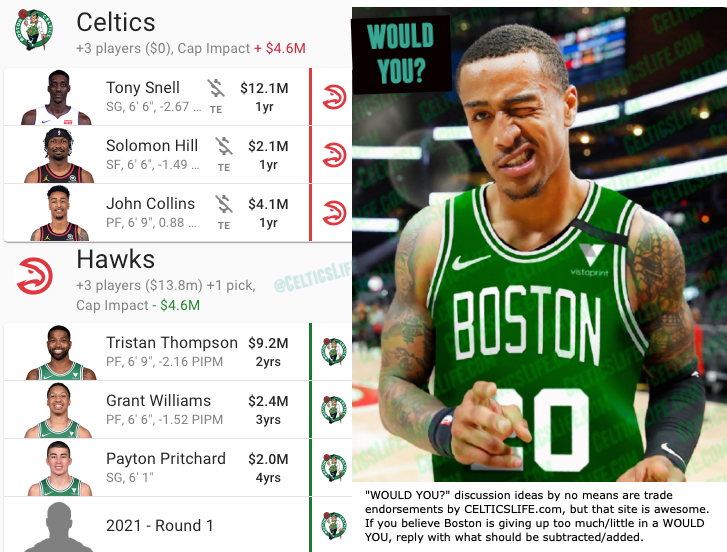 Was asked to do a WOULD YOU on John Collins who I have mentioned previously is probably the best fit for the Celtics needs. If you were trading for Collins it would be with the intent to sign him to a lucrative deal this offseason. The Celtics can't afford to trade future assets for a player who follows in the footsteps of Gordon Hayward, Terry Rozier, Al Horford, Marcus Morris, and Kyrie Irving and just walks as a free agent.

Complicating matters further is the fact that John Collins is both very good and young, so you can't just make a Would You with picks. Initially I wanted to just test the pulse of Celtics Nation to see if they would do a John Collins for Marcus Smart trade straight up, since if fans weren't fine with that then its hard to see a fair offer they would be.
Of course if you're unwilling to part with Marcus Smart then Robert Williams is next in line as an actual young assets teams would want. But with his recent play and the fact the Hawks already have a similar center in Clint Capela, I decided to go a different route.


What's important to note about a potential Collins deal is the Hawks actually want to move him. We're not talking about a Jerami Grant or Bradley Beal where the other team isn't moving them unless you made a massive overpay. Or a Vucevic or Barnes, where the other team is wishy washy on whether to move their guy. If you are fine with paying the 23 year old Collins to be the big man that compliments the Jay's to form your Big 3, you actually might be able to trade for him in a fair deal.

It’s hard to predict Celtics fans. Fans who comment on the site seem to be more objective, but who knows how Twitter/Facebook Celtics fans will react. Instead of altering a deal to make it more realistic they tend to just reply that you're a homer or a clown, depending on if the Celtics are giving up too little or too much. Typically in trade talks both teams aren't offering enough and they come to a compromise. So edit this trade away if you like if you think its unbalanced.

Get caught up with The Fast Break:


A few weeks ago I'd argue this wasn't near enough to get a deal done, but the Hawks do seem rather motivated to make a deal, so its not out of the realm of possibility. The Hawks reason for turning it down would likely be that Pritchard isn't a good enough young player and the pick isn't projected to be a good enough pick. I'm guessing they'd want Time Lord thrown into the offer. Yes they have Capela, but an asset is an asset. They could always make a future trade with either Capela or Time Lord.

But let’s say the Hawks really like Pritchard just like we all do. Again he duplicates a position since Trae Young is their franchise guy, but when building a team it's more important to acquire talent than positional balance. Plus the Hawks are deep at every position, so there's that. The Hawks get the Celtics 2021 1st rounder in this deal as well. So if the Hawks goal was to swap Collins for a solid pick or young player, combined I believe Pritchard and a 1st meets that requirement. As a sweetener I included Grant Williams in there in exchange for Solomon Hill. So the Hawks in total receive a first rounder from the 2019, 2020, and 2021 drafts.


I also included veterans Tristan Thompson and Tony Snell to balance out the trade position wise for both teams and also to save the Hawks some cash this season as Snell makes a few million more than Tristan. With Collins, Time Lord, and Theis there would be no playing time for Tristan in Boston unless Theis was dealt. And Theis very well might be dealt, and who knows maybe he's included in this deal instead, but personally I feel Theis is a better fit for Boston than Tristan, so Thompson was included. If the Hawks want Theis instead, I suppose you could swap him for Tristan and remove the Grant Williams/Solomon Hill component. So it would be Pritchard, Theis, and a 2021 1st for Collins and Snell.

Is John Collins the piece the Celtics need? https://t.co/Jy6Ovpkp2G pic.twitter.com/3UXZz59ytI

Sticking with the trade as listed above the Celtics would have much more positional versatility in their front court. While Collins similar to every big man in today's NBA plays best when he is the lone big man on the floor, he is still very capable next to another big. You could play Collins next to Theis or Time Lord with much better results than playing Tristan with either.

Tony Snell wouldn't just be a throw-in for Boston. The 6'6" wing is a very solid 3-point shooter and would serve as the team's first wing off the bench. A eight man rotation of Kemba, Jaylen, Tatum, Collins, Theis, Smart, Time Lord, and Snell I believe launches you into contender status this season.

Committing big bucks to Collins likely means you'd see Ainge try and move Kemba in the offseason for if nothing else tax reasons. This is where it would be nice to have Pritchard still around, but you have to give something to get something. Maybe a Ricky Rubio makes sense in some point guard time share next season. Rubio also is very available right now, so if you weren't comfortable with just Kemba and Smart at the point for the duration of this season, you could easily trade for Rubio in another move.


Honestly I think the Hawks are being dumb in not wanting to retain Collins, but that's how you make a good trade in the NBA. When the other team is making a poor decision. Maybe Atlanta saw the Celtics try and get cute in a Hayward sign-and-trade deal with Indiana, and would prefer a good young player (Pritchard) and a couple additional 1sts (Grant in 2019 and the upcoming 2021 one) rather than losing him for nothing in free agency like Boston did with Hayward. Once the Hawks added Capela, they more or less made the decision not to pay Collins. You can't have two bigs on your roster making big bucks and expect to win in today's NBA.

I believe for the Celtics to regain contender status they need one more big gun. Collins would be that. He can score, rebound, play make, and block shots. He's an ideal Draymond Green style small ball 5, but he can also play next to a center like Time Lord. He's 23, which means for a change the Celtics would be investing big bucks in acquiring a player who's best years aren't behind him.


Atlanta Hawks to listen to offers on John Collins who would be a perfect fit for the Celtics https://t.co/W0xXKUnhgm
What should Boston's offer to Atlanta be (Try to suggest something ATL would actually consider)? pic.twitter.com/nQlmY5RUne

Age wise Collins lines up great with the Celtics young core. Tatum, Brown and Collins are a capable Big 3. Add Smart and Time Lord and you have a team that should contend for many years. Like I mentioned prior, Ainge likley ends up moving Kemba in the offseason or next season if this trade were to take place. Moving Kemba would allow Boston to have their Big 3 all on big contracts, but still retain Marcud Smart as his free agency is around the corner.

Once you have a Big 3 its a lot easier to fill in the gaps. You also become a team that players who were bought out and veterans want to sign with. It's no coincidence that after the Celtics traded for KG to form their Big 3 in the summer of 2007, all of a sudden they were signing guys like Posey House, PJ, Cassell, Rasheed, Marbury, Shaq, Jermaine, etc.
So would you?