WOULD YOU? (Houston we have a trade) 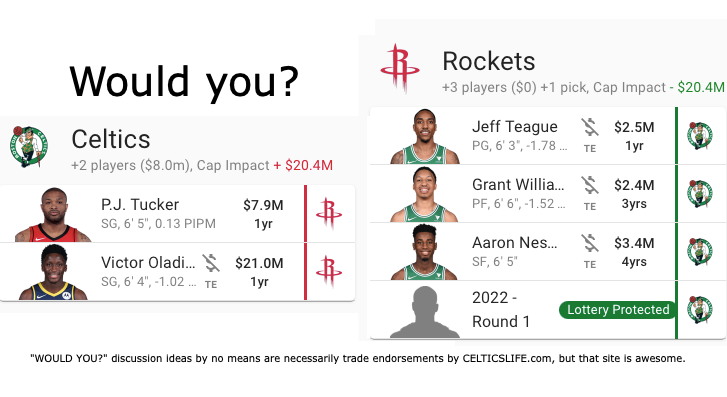 Been posting these "Would you?" trade questions on Twitter and Facebook of late and they've received a lot of interest, but I figured why should they have all the fun?! So here is one for the Celtics Life masses.

Now one thing to keep in mind about trade ideas is by no means is a "Would you?" an endorsement of said deal. It's a trade that would work cap wise that should be at least somewhat realistic. Some will be idea that only the Celtics would accept, while others may be tilted in another teams' favor. As opposed to Twitter, where a response to the latter might be "Delete your account," if you feel the Celtics are giving up too much in a "Would you?" you can simply leave a comment with a deal for that return that would be more palatable.

Now fans notoriously overrate their players and underrate draft picks, so if a trade idea gets universal approval from a team's fan base it's definitely tilted too much in that team's favor. If the reaction is 50/50, it's likely not a doable trade either. I still remember a couple poles that were out where 90% of Celtics fans said they would not trade Al Jefferson for Kevin Garnett.

But if we can come up with some trades ideas that half of you like and half don't then there are at least some bones for a potential deal. If everyone likes it then we've failed and it's too lopsided in favor of the Celtics. But again, the posting of a "Would you?" is not an endorsement. Not saying I wouldn't, but also saying you might see some ones I definitely wouldn't (like bringing back Blake Griffin and his contract).

So with all that out of the way, would you do this deal? Rockets get young pieces in Grant Williams, Aaron Nesmith, and a 2022 1st rounder for their expiring contracts. Oladipo just turned down a low ball offer from the Rockets of $45 total years. My guess is since they seemed to prefer 'Dipo over Caris Levert in the Harden deal, they'd want a fairly good return in any trade. Maybe you can get away with only including two of the Nesmith, Grant Williams, 1st round draft pick offer. More so if you're not also getting Tucker back. But can't see the Rockets settling for just let's say Grant Williams and a 2022 1st. It's possible a compromise might be further protections on the 1st rounder. 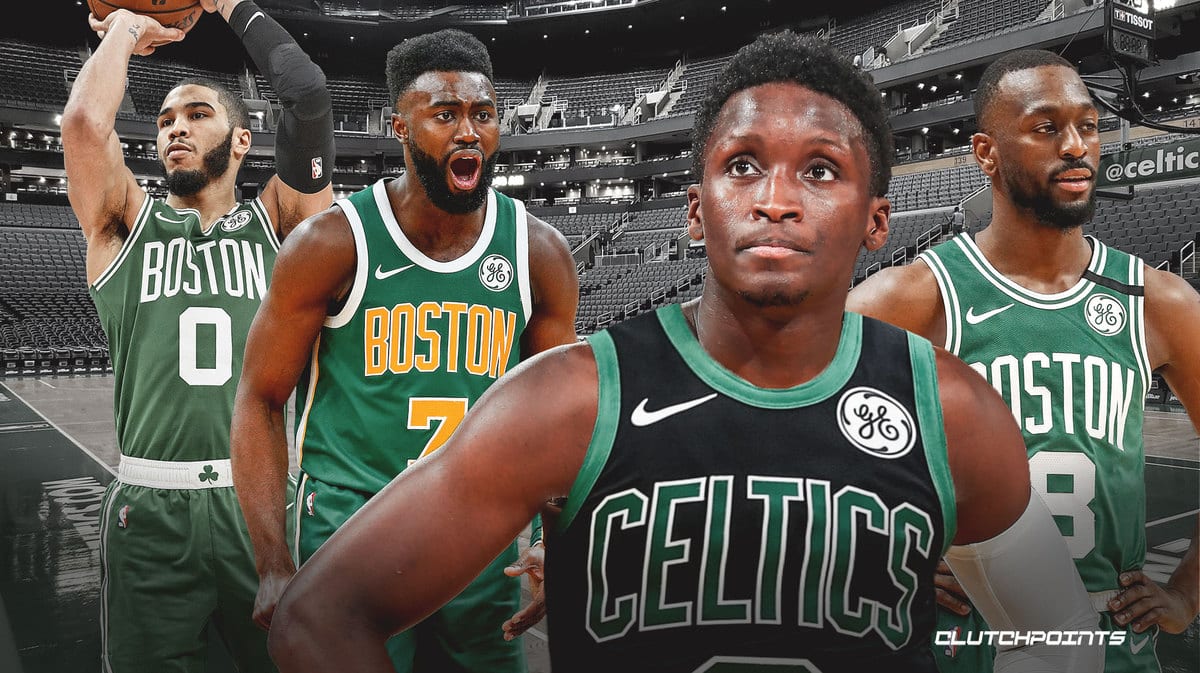 I've seen a lot of Celtics fans change their tune on Victor Oladipo and want him in Celtics green now. The interesting part of this is if you dared suggest a Hayward for 'Dipo sign-and-trade after Boston was eliminated from the Heat, you'd receive the response, "We want Myles turner, not Oladipo!" But following the Hornets failed attempt to sign Montrezl Harrell after he spurned a huge offer from them to sign a much smaller one with Lebron and his fellow Klutch crew on the Lakers, Charlotte increased their offer for Gordon Hayward and snagged him. Danny Ainge was left trying to change the reality that he could have traded Hayward to the Pacers for Myles, McDermott and a 1st prior to the Harrell deal falling apart.

But anyway, Ainge traded two extra 2nd rounders to get a massive TPE from Charlotte after acquiring two 2nd rounders in a trade of #30 pick Desmond Bane. And also to get rid of Enes Kanter to sign Tristan Thompson.

So here we are full circle. Should Ainge trade that TPE and young assets for Oladipo who now Celtics fans prefer over Turner? Honestly both Turner and 'Dipo are good players and would have been solid returns for a guy who was a FA, but that was just my opinion then (and now). The Pacers aren't trading Turner for a TPE and might not even want to trade with Boston period anymore. Oladipo would be the additional playmaker this team has needed all season. He's a different player than Gordon Hayward, but in order to still contend this season Boston needed to replace Hayward with someone at least comparable in talent.

'Dipo had the gruesome injury like Hayward did. He's a bit younger, but also likely not 100% back yet like Hayward. Probably won't be until next season when you can play Oladipo in back-to-backs. But then again I don't think Hayward is even playing back-to-backs and by next year half the league won't at this rate.

And Tucker unless he's fallen off a cliff would be a tremendous veteran 4 for this Celtics team in the playoffs. Could also play small ball 5 if injuries hit our big men trio. Lastly, acquiring Tucker could open up another big to be traded elsewhere. Just a guess here, but I don't think the Rockets will look at this as enough talent coming back. They likely get better returns trading each guy separately.

Like who are you billing as the centerpiece of this deal if you're Houston? Aaron Nesmith? So you traded James Harden and passed on Caris Levert for Oladipo who you then trade for Aaron Nesmith? That's hard to sell to a fan base. But 1st rounders always have a lot of value at the trade deadline. Maybe Ainge could ship Tristan out in a separate deal and reroute what ever he gets for him to the Rockets. But is subtracting Thompson and a couple young guys who are playing now and adding Tucker and Oladipo enough to get you a championship this season? I think you are much closer on paper, but players need to click on the floor not just paper. Also what are your plans for Oladipo and Tucker long term?

If PJ Tucker doesn’t take inspiration from his fictional name sake Lucian Tucker and pull this move I will be sorely disappointed. https://t.co/HR58ULMB1P pic.twitter.com/bgniGRTzIA

You can't give up too much is they are both rentals. You also can't just overpay them as free agents in order to not have traded young assets for nothing. And Danny doesn't exactly have a great recent track record in the "My FA walked and all I got was this lousy t'shirt" department. Rozier, Kyrie, Morris, Horford, and Hayward all left as free agents for nothing.

One thing for sure is if this trade went down we'd definitely have a lot more to talk about this season.