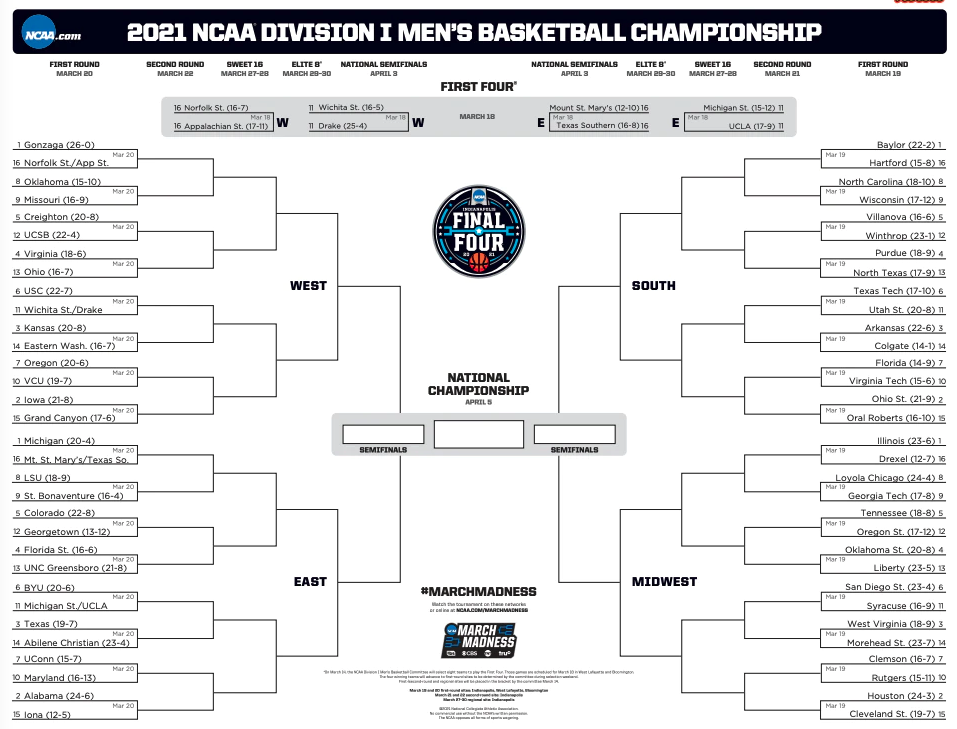 There are a number of times people predict the right things. However, there are some events that are very hard to predict and even 1 in quintillions. One such event is the March Madness Bracket event of the NCAA basketball tournament. It started in 1939 and from that time, millions of people participated to test their luck and other prediction skills. Apart from basketball enthusiasts, there are a number of mathematicians who also participate and try to predict right using their calculation skills. As of now, not a single person ever gets successful to win this challenge. There are various reasons why people get very much interested in this mega event. This article will educate you about probability and other things associated with this prediction. At the end of the article, you can know why it is nearly impossible to predict rightly.

What Is the March Madness Bracket Challenge?

Each year, NCAA Division 1 organizes a basketball tournament with 68 teams. There are almost 7 rounds for the single-elimination tournament and this penultimate round comes with 4 teams and they are known as Final Four. The main aim of this challenge is to predict the appropriate result for all of the 63 matches in the 7 rounds. At the present time, none of the participants have predicted rightly. However, most of them have to reach few goals to predict these matches. So, there is not any winner till now for this challenge.

When and How this Challenge Started?

What Is the Challenge and how does it Work?

Anyone can take part in the challenge just by registering their name on the official website of the NCAA. One thing is to keep in mind that, if you are overwhelmed with the winning probability, then you are wrong. To win the March Madness Bracket title, participants have to guess all the 63 games that are scheduled to play. This prediction will be registered before the tournament starts. Therefore, predicting the right outcome is almost impossible. Even, there are popular mathematicians and astrologers who also fail to predict the right result.

What Are the Chances of Winning the March Madness Bracket?

It is quite easy to win a lottery even, you can get stuck with a meteorite but winning the March Madness Bracket Challenge is 1 in 9 quintillion times. Almost every participant does deep research before going to join in this event. There are also some mathematicians who try their level best to come out with the right kind of prediction that will make them the winner. But almost all are failing to predict 100 percent. The odds of randomly selecting the accurate result are next to impossible. Therefore, without researching the past result, no one should even think to win this challenge.

There are almost 5, 40,000 players take part in one basketball season in the USA. They only get only 1 of 35 chances of making any kind of bigger college basketball leagues. From that tournament, basketball players have 1 in 75 chances of being selected in the NBA or for any other tournaments. If we will sum all this data, find that it is literally hard for a player to get selected in any basketball team, and predicting the right for March Madness Bracket is a bigger challenge itself. Still, there are millions of people even some seasoned lottery players love to jump to this fry out of curiosity.

Is it Right to Participate in this Challenge?

Everyone is driven by desire and this desire to win attracts millions of people around the world to this next to an impossible challenge. Although there are huge odds against winning the title of Madness March bracket, it is quite satisfying to see how close you are with your prediction. It mainly helps to increase the excitement and in this way, people don’t hesitate to spend resources in order to participate in this challenge. So, it is worth participating in the Madness March bracket challenge.