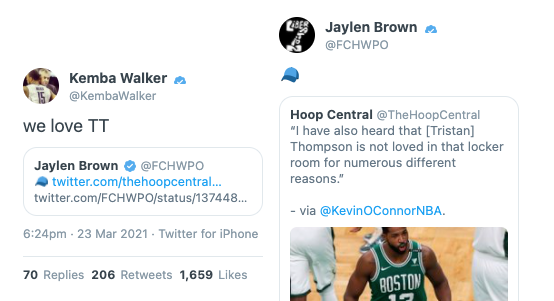 It's a reporter's job to report a credible rumor. If you think your sources are credible, reporters shouldn't get hammered for being the messenger. I defended a reporter recently, who got attacked because she dared to share that her source said Brad Stevens had called a meeting.

With that said, Tristan like Kemba Walker the year prior were added to the roster partly because they were universally known as positive locker room guys. The veteran leaders you want around. So hoping O'Connor added some context behind this report. Don't know him personally, but he's been around for long enough that he doesn't just make stuff up. His draft guide is probably the most detailed one out there. Also "loved" is a strong word. NBA players all refer to each other as brothers nowadays, but anyone can piss someone off one day and a teammate not be feeling the "love" for them at that moment in time. Give it a few days.

When Marcus and Jaylen got into it during last year's playoffs and then they had to immediately prove that they were still cool with each other, because that's the times we are living in and people will blow stuff out of proportion at the smallest sign of smoke... you think they really had a ton of "love" for each other that next day? Or was it more "like," and give me a few days before I have to say "love."?

Locker room could also mean coaching staff. If that's the case you can likely disregard my comments on players. That said, the "It's us against the world!" rallying cry has been used by many teams prior to come together and accomplish great things, so if the players want to rally against the media to win a championship, it's fine by me. Just don't signal out O'Connor. He doesn't deserve that. If you need some suggestions of Celtics reporters or producers that you want to use on your posters, hit me up Kemba and Jaylen. Appreciate you guys standing up for a teammate regardless. p.s. If you are wondering what a blue cap means the internet tells me it means lies.