Showing (almost) everyone some love after a great win 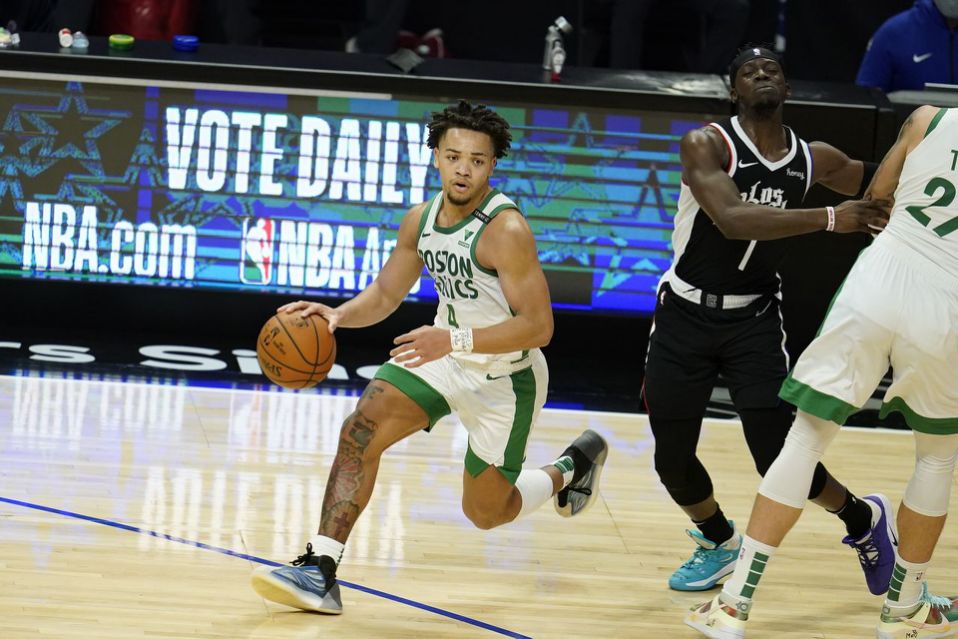 Another night, another Celtics game to come down to the wire. I mean c'mon, it’s every night with these guys. Luckily, despite how shorthanded the Celtics were, they pulled out a solid team win against the Clippers. This felt like a pretty good win because they had to make a comeback throughout the game, and then they had to find a way to close the game, which they actually did for once. I know the Clippers also had players out too, but this might’ve been one of the best wins of the season for the Celtics.

For those who've been complaining about the Celtics "always" blowing big leads?

This game was a very well coached and managed game by Brad Stevens. On the offensive end he had a good strategy for attacking their zone and he switched up his defense a couple times to throw the Clippers off. He made some interesting managing decisions like playing Carsen Edwards for 30 minutes, but it paid off in the end because Carsen was feeling it last night. Also I’ll give him credit for coaching through a 16 point comeback win. I feel like these are the type of games Brad thrives in for some reason.

The Tatum vs Kawhi matchup was fun to watch. Tatum had a total of 34 points with 4 steals and he did a great job running the offense to close out the game in the fourth. His defense last night was phenomenal as well. Tatum covered Kawhi for a total of 5:20 and held him to 1 point going 0-2 with 1 turnover. Kawhi wanted no part of Tatum’s defense last night. Flipping that around, Tatum scored 7 points going 2-3 from the field against Kawhi. It would've been really fun to see the Jays vs Kawhi and PG, but watching Tatum be the best player in a game invloving Kawhi was also pretty great.

Tough night for the “trade Kemba” gang. It was nice to see Kemba get back to doing his thing last night, as he put up 24 points in the W. After a rough couple of fourth quarter outings, Cardiac Kemba resurrected last night earning 10 points on 4-6 shooting, including the game winner. Also I can’t keep stressing enough how important his activity on defense has been. He was flying around on both ends.

It was expected for Tatum and Kemba to have good games, but for the Celtics to win some role players had to step up, which they did. Almost everyone who played had a part to winning this game, but it ultimately makes the rotation so confusing. I’ve kind of come to the conclusion that the Celtics will never have a consistent rotation of 8 or 9 guys because someone's always hurt or because players aren't consistent. It’s going to be different every night and it’ll be very situational.

Despite the long-run bench issues that could pop up later in the year, let’s just be happy that the Celtics had 39 bench points last night, led by Carsen Edwards. I feel like I gave up on Carsen Edwards, but he has been getting opportunities lately and proving to be valuable. When the team was down 12 early in the second quarter, he came in and drilled two threes in a row, then assisted on a Grant Williams three as well. I’m sure you heard Scal say this, but Carsen is one of those guys who if he hits his first shot of the game, he becomes dangerous.

Edwards also started the second half when Theis was out. He didn’t score during that run, but he was able to flow with the offense. He also got the late game minutes and drew a foul taking a three which gave the Celtics a 109-108 lead in the fourth. He finished with 16 points on 5-8 shooting, but most importantly he looked comfortable. He has a high ceiling and if he can become the shooter we need him to be then the Celtics would be in way better shape.

Grant had a big part in last night’s game, as he typically does in games like this. He has been shooting lights out lately, as he had 11 points going 3-4 from deep last night. He is shooting 50% from three this season (19-38). He had a tough assignment having to cover Kawhi a good amount last night. He was on him for 2:46, letting up 14 points on 4-7 shooting. I wouldn’t say he won that matchup, but keeping him under 20 feels like a win to me so we’ll give it to him. Grant played late minutes last night, and helped hold down the fort in the end. He also did a lot of the dirty work, setting picks, boxing people out and all that good stuff. I love seeing this guy play well.

I’ve been hard on him lately, but Thompson has actually had a great road trip so far.

Tristan Thompson is averaging 13.7 points and 8.3 rebounds on C's road trip while shooting 75 percent from the field.

I don’t think he has done anything to change up his game besides hit his shots. Recently, those ‘5 little floater shots have been going in. I still don’t like those takes, but when they go in they go in. He just needs to be more consistent with his shooting and defense because you know he’s going to get rebounds regardless. Last night he got timley rebounds at the end of the game and hit timely free throws. Thompson was matched up on Ibaka most of the night, holding him to only 5 points. The way I see it, Thompson is fighting for starting center role every night so I expect him to bring the energy almost every night.

We got productive nights for Rob Will and Pritchard too. Rob did his thing on both sides, scoring 10 points while getting 2 steals in 15 minutes. In Pritchard’s first game back, he picked up right where he left off, scoring 8 points on 3-4 from the field (2-3 from three), providing aggressive on-ball defense as usual. These two guys are trustworthy on a gamely basis, in my opinion.

Semi didn’t have his best game shooting, but he certainly had a role in the win.

There aren’t many players in the league whose value is based strictly on being able to cover superstar caliber players, but Semi isn’t a typical NBA player. Here’s the clip of him making Kawhi his bitch:

While the Celtics had a great all-around team win, I will acknowledge that Jeff Teague also played basketball last night.

Brad Stevens: "We don't need everybody to put on a cape. We just need them to do their jobs well."