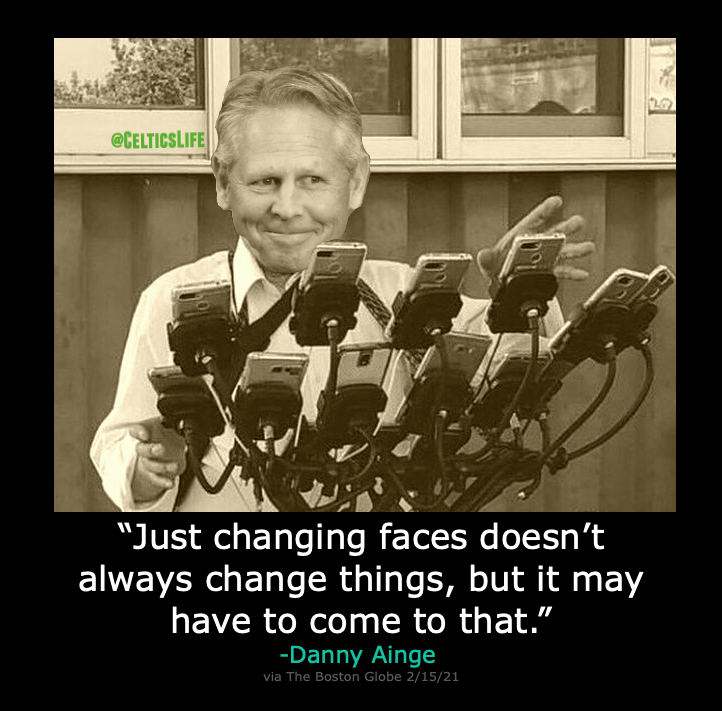 Following two very disappointing losses to Eastern Conference cellar dwellers, Danny Ainge says the Celtics need to have more urgency . And as the Celtics' record has fallen to .500, Ainge also had the following to say:

“Just changing faces doesn’t always change things, but it may have to come to that.”

You may think Danny is feeling the heat to make a move, but I seriously doubt he's on any hot seat. He has a great relationship with the Celtoixs ownership group and almost all the Celtics writers treat him like he's Red Auerbach. No if Danny makes a move it's because he feels the move will what's best for the Celtics.

I know people like to point out the times that it was all talk and no action, but Ainge has made quite a lot of trades. I'd venture to say he trades more than most GM's. He's traded Antoine Walker, top picks, Al Jefferson, Rajon Rondo, Paul Pierce, Kevin Garnett, Avery Bradley, Isaiah Thomas, Kendrick Perkins, Jeff Green... the list goes on. It's just that most talk doesn't lead to trades. That goes for all NBA teams. Maybe Celtics fans are more fanatic about their team so it stands out more with Ainge.

As Ainge pointed out on his visit with Toucher & Rich last Thursday, the Celtics can only use up to $19 million of the TPE right now and that they can use the full TPE in the coming offseason. Obviously $19 mil is nothing to sneeze at, but it does limit you some. Also it sounded like Ainge feels the Celtics could get a better return for the TPE in the offseason, say at draft time. He warned the issue with just trading it now for some contract that teams want to unload is that if something better comes along in the future, well then you're out of luck.

I tried to reduce fans' expectations on what a TPE was worth when the Celtics were in the process of trying to get one from Charlotte. Like they aren't a bad thing, but they just aren't as valuable as people think. You can trade a Gordon Hayward for a Victor Oladipo or Myles Turner and a 1st rounder. You can't trade a TPE for something like that. It's more like the TPE with your picks attached for a Turner or Oladipo. And picks shouldn't be discounted as throwaways if they are "just going to be in the 20's anyway." The Celtics selected Payton Pritchard at #26 and Demond Bane at #30 this past draft.

I do not see the Celtics taking that second option. They made it to the Eastern Conference last year with a similar team. Their main guys are healthy. No way Ainge throws in the towel now. With this in mind even though there are no guarantees in life you should expect with a higher probability that the Celtics will make a trade prior to the deadline.