Who Rocked It Best? Number 42

On this week's Who Rocked It Best?  We present jersey number 42 and its four past wearers: Al Horford, Tony Allen, Vin Baker, and Chris Ford.
Big Al is 42's most recent rocker, wearing it from the time the C's signed him in 2016 through his departure in '19.  One of the bigger free agent catches in Celtics history, Horford ably anchored the middle and facilitated the offense for Brad Stevens, averaging career bests in assists during his time in Green (a career 3.3 apg passer, he was 4.6 apg as a Celt).  As big a coup as his arrival was in Beantown, however, Big Al left the C's appallingly quietly, it seemed, signing quickly with the rival Sixers without warning as free agency opened in '19.  Still, it can be argued that Big Al gave the C's his three best years of his NBA career.
Allen is one of Danny Ainge's first picks ('04 draft, 25th overall) who typified the physical and skill set which Ainge envisioned for NBA success: athletic, long-limbed, and with a defense-first mentality.  Checking all these boxes, TA stands 6'4", but covered wings with a 6'9" wingspan, and made defense his hallmark in the L.  He sparked Boston's 2nd unit D through to the NBA Finals twice, and earned his ring in '08 behind the Truth/KG/Ray squad.  He also made the NBA's All-Defense first team and second team three times each in his career.
Baker was a four-time NBA All-Star, and an All-NBA Second and Third teamer in his 13-year career, but unfortunately, spent his time in Green mostly as an enigma.  The 6'11" Hartford product was originally drafted by the Bucks in '93 (8th overall), and produced All-Star seasons in Milwaukee and Seattle before getting dealt to Boston in '02.  It was thought that a return to New England would re-ignite an already plateauing career at that point, but the homecoming did little to inspire that result.  Plagued by substance dependency issues at the time, Baker was barely the shell of his former self, and was cut loose by the C's the following year.  Still, the brief New England reunion had local fans cheering on 42, as they excitedly awaited Baker's breakout performance.
Last but not the least here, is Chris Ford, who is listed in the NBA books as the first player to make a three when the three-point arc was introduced in the NBA in '79.  An original pick by the Pistons in '72, Ford was dealt to the C's in '78, where the following year, as a veteran, he helped bring along a rookie named Larry Bird.  He would win swag with the '81 Champs before retiring the following year and joining the Celts coaching staff, where he would earn two more rings ('84 and '86) as an assistant under K.C. Jones.  Ford would later take on head coaching duties for the C's from '90-'95, and then for the Bucks, Clippers, and Sixers afterwards, but there was no better time for this 42 than the '80s.
So after taking all of this in, who do you, CelticsLifer, think rocked jersey number 42 best?  Let us know! 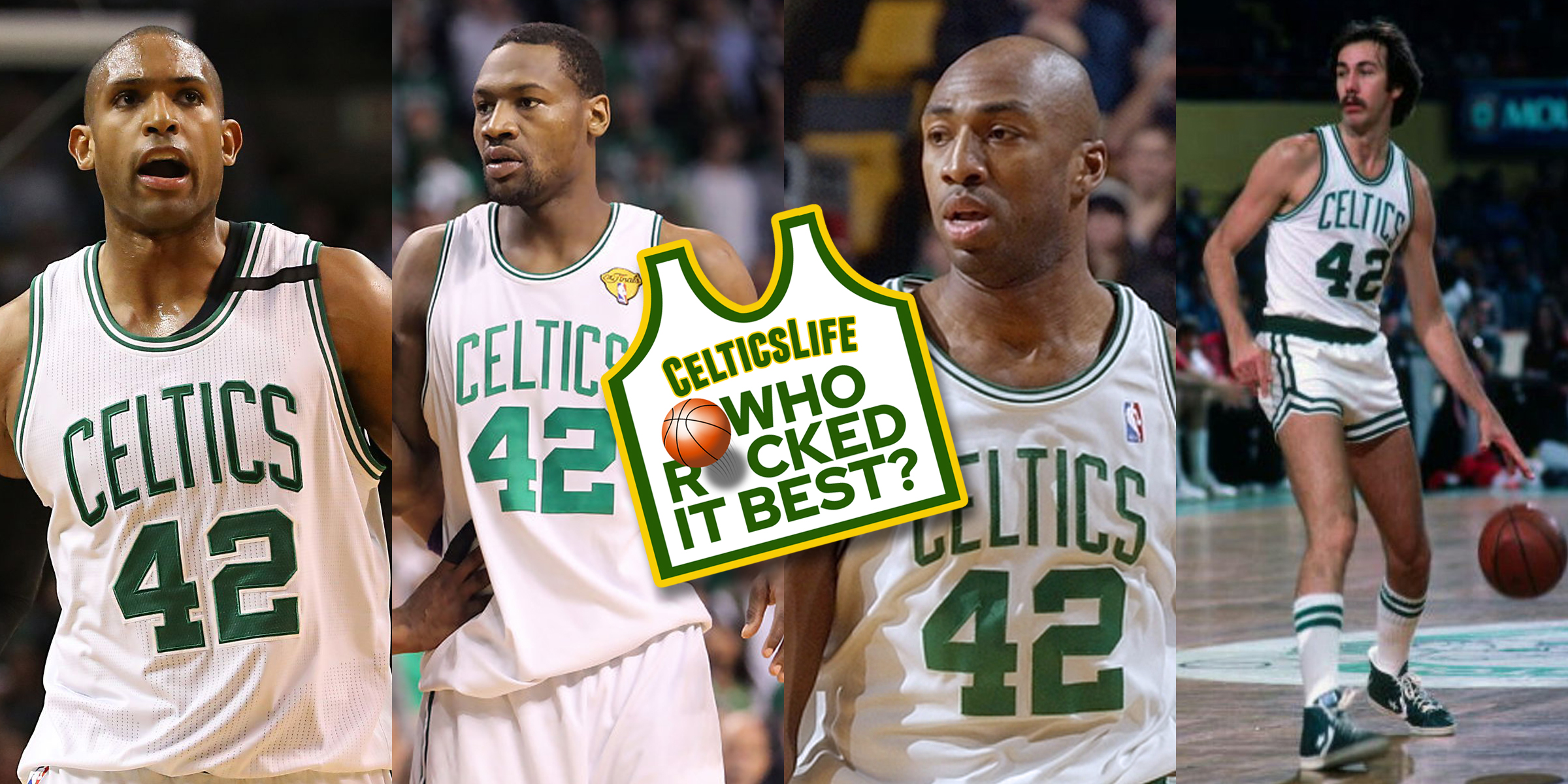