The importance of K.C. Jones to the game of basketball 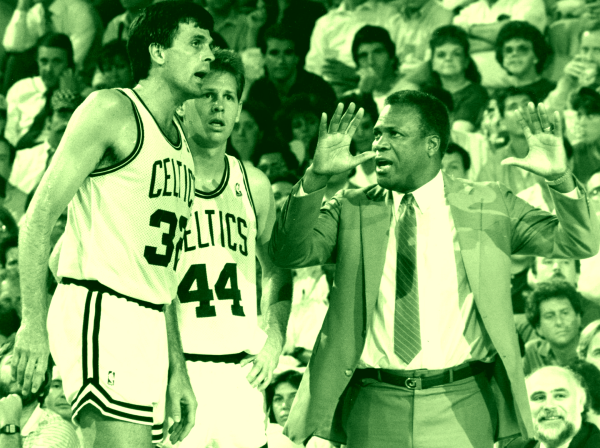 Guest post by Andy Lipton
The No. 25 has hung from the rafters of the Garden in Boston for over 50 years. It is a reminder that basketball is a team sport,that every player can be important and contribute, not just the players who can score a lot of points, and that they must work together, often sacrificing their own personal goals, in order tosucceed as a team.
Arnold “Red” Auerbach, the architect and patriarch of what is still the original gold standard in basketball, the 1950s and 1960s Boston Celtics, didn’t waste time in retiring K.C. Jones’ No. 25 in February 1967. He did it during K.C.’s last year as a Celtic player.
Red Auerbach always stressed the often-overlooked aspects of winning basketball - defense, passing, rebounding, setting screens, selflessness, grit, and hustle - and made sure the public understood that players like K.C. Jones were so important and valued.
The Boston Celtics of the 1950s and 1960s, won 11 championships in 13 years. It was not only successfulbasketball, but it was beautiful to watch. Unselfish ball movement, fast-breaking, tough defense.
Celtic fans who saw K.C. play in the 1960s and saw him coachthe Celtics in in the 1980s, knew how good he was as a player, as a coach, as an athlete, and as a person. He was very much beloved and appreciated by Celtics fans.
K.C. is as synonymous with Celtic Basketball as are the headliners of the 50’s and 60’s Celtics. He played on eight championship teams in his nine seasons. When K.C. came to the Celtics in 1958, what turned out to be a Celtic dynasty had just begun, with its first NBA championship in the 1956-57 season.Its second championship came in Jones’ rookie season.
He brought a winning way to the Celtics having won two NCAA championships at the University of San Francisco (USF) and a gold medal at the 1956 Olympics.
When Bob Cousy retired in 1963, Jones became a starter. It was the Jones boys in the backcourt. Sam Jones was the clutch scorer and K.C. was the defensive stopper.
K.C. was as tough a defender as there was in the league, if not the best. Jerry West once said that K.C. was his toughest defender. He hustled. He played hurt. He very rarely missed a game. In the eight years after his rookie season, he never missed more than two games during the regular season.
And he was the ball-handling point guard who started the Celtic offense. In his last four years with the Celtics, the years that he was a starter, he averaged over 5 assists a game, ranking third in the league three of those years.
The season before K.C. became the Celtic head coach had ended in disappointment for the Celtics, as they lost four straightgames to the Bucks in the Eastern Conference semifinal playoffs. The team had matured into veterans and Red Auerbach knew the team needed a new and different voice.
As Celtic head coach, he provided the right touch for a veteran team. He knew how to guide and mesh a team loaded with stars.He gave his players a good amount of rope, but knew when and how to tighten that rope.
K.C. was a calm presence on the sidelines. He did not micro-manage his players every movement during the games. He trusted his players. He didn’t rant and rave.
In his five years as Celtics head coach, he delivered two NBA Championships, and four Finals appearances. And his teams had fun playing the game. Déjà vu. It was Celtic Basketball again.
Bill Walton recently said that the game of basketball today is overcoached and undertaught. Walton knows basketball. He played for and won championships with legendary coaches John Wooden and Jack Ramsey. And let’s not forget, with a Celtic team coached by K.C. Jones in the 1985-86 season. A team some consider to be the best in NBA history.
When K.C. retired as head coach of the Celtics, he was influential in having Auerbach pick his Celtic assistant coach Jimmy Rodgers, as the new Celtic head coach. It gave Rodgers, who had been an assistant coach in the NBA for over 15 years,the chance to finally be a head coach.
K.C. Jones showed that you could be highly competitive on the court and still be a gentleman.
K.C. was wrapped in humility. It was also part of the DNA of the 1950s and 1960s Celtic players. While they played, they did not brag about their accomplishments or disparage theiropponents. If anything, they respected their opponents. And after their playing days were over, they did not feel the need to make noise, to argue their accomplishments against the accomplishments of newer generations, or to simply boast about or even try to be remembered for their accomplishments.
K.C. and his Celtic teammates let their basketball playing do the talking for them.
And as a very successful Celtic coach, K.C. gave the credit to his players.
I’ll give K.C.’s Celtic and USF teammate and USF roommate, his good friend Bill Russell, the final words. They are fromRussell’s 1966 autobiography (as told to William McSweeny), Go Up for Glory.
“K.C has the most fantastic basketball mind I have ever seen. He can make up whole patterns in a split second, can grasp the issue quicker and command a situation more certainly than any man I have ever seen.”
“[A]s the years went on [KC] became noted as the greatest defensive backcourtman in the game.”
“What kind of man was he, even then [in college]? This kind. I needed a pair of shoes. Holes in each sole. K.C. and I were walking along and he took me into a shoe store and bought me a pair. No words. Just plain bought me the pair of shoes.”
“[KC] … is perhaps the best-loved player in professional sports, both by outsiders and participants.”
Guest post by Andy Lipton