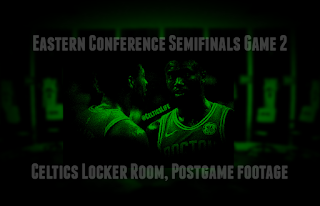 This week we heard from Grant Williams how he was told to "Shut the F#ck up!" when he tried to intervene in the Celtics/Raptors Game 2 locker room brouhaha. Well the Celtics Life crack news team led by Rondo Burgundy used that information to do some investigative reporting and we're pretty confident we have found the video of the team in the locker room:


Grant Williams does have a point that Jaylen and Marcus are brothers and shouldn't be fighting each other, but they didn't want to hear from the rook. Not sure why Paul Pierce was there, but he felt that it was "family business" and that Grant should let them handle the situation themselves. Still not clear who told Williams to shut the F up, but from the video it was most likely either Smart or Pierce. Could be anyone though.


Grant Williams LOVES to talk. He joined the @GlobeBobRyan and Goodman Pod and recalled the two times he got yelled at as a rookie for talking too much. pic.twitter.com/hF49zEAIOL