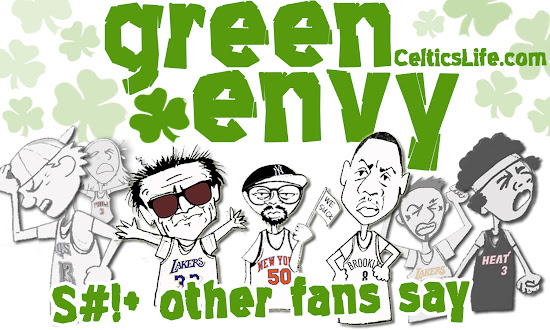 Locker room confrontations and thrown chairs seem to work well. The Boston Celtics defeated the Miami Heat 117-106 on Saturday night in a must win game 3 where they potentially were going to go down 0-3. The Heat fans weren't as riled up (get it?) as they usually are considering their team is still up a game, but of course there are the odd ones out who think the sky is falling. There was a ton of complaining about the refs tonight too. Let's hear what a few of them had to say.
Top Comments
At least there's no chance of us throwing a tantrum in the locker room post game
-The tantrum worked.
sad broom noises
Everyone talking about Jimmy Bricks, but honestly what the fuck was KO doing. we have to put someone in for Bam to get rest. That Maple Flacid Dick, was horrible. 0-6? I think. Fuck you doing. And even worse on defense. Unacceptable
*Heat 2-1 Refs
Thats it. I am never gonna leave my couch again. We are undefeated when I stay there. I'm not leaving my house anymore.
The Best of The Rest
Fucking disgraceful. They knew the Celtics were fighting for their lives. I don't want to hear shit about "Heat culture" right now.
TYRONE HERRO SHOWED UP
Mark Jackson 0-3 against Bam’s last name
This has been by far Jimmy's worst game in the whole bubble. Looking like Lukewarm P out there
I want what Mark Jackson is on, out here describing bubble Dragon as poor man’s manu
There’s 3 players on the other team with more points than our max player
Shoutout to Nunn for 4 mins and 2 fou
We can’t expect to go down double digits every fucking game and expect to win them all, let’s not do that
Paul Pierce must hate having to talk about us being up 2-0 on his Celtics lol
I hope we win this one so we can shut off Paul Pierce shitty ass
someone tell them they don't have to trail to win
Stop blaming the refs, folks. Shit is lame. Did some calls not go our way? Of course. But you don’t go down by 20 because of the refs. No one to blame but our own guys tonight.
Don’t do that, don’t give me hope.
Here comes First Take tomorrow talking about our loss for the next 4 days. But when we win... nothing (Excuse me? Have you ever heard a Celtics segment that wasn't about a loss?)
Jimmy so addicted to hero ball he's basically shaving points throughout the first half with his low effort.
Refs celebrating tonight! Got a big dub tonight! Finally!
we are the only team that makes Kanter a playable NBA center lol
We better come out pissed game 4 and dominate them (we won’t bc that’s not Heat basketball lol) (that's not very fan-like of you)
Well at least were not gonna throw a tantrum in the locker room post game
I know I should be happy they clawed back in, but I’m so damn tired of playing 1 quarter well in a 4 quarter game
Where tf is the all rookie team Nunn we knew?
-Back in Miami
From hero to zero (too easy)
if you dont like that, you dont like Miami Heat basketball
Welp that was the anti-dagger by herro
I almost forgot Jimmy was on the team
Even if we lose this game, hold your composure. DON’T BE A FAKE FAN!(It's a little too late for some...)
Why did they think Hayward is like Lebron or something?
I lowkey wanna see Meyers on Enes. (What a weird ask)
It’s not a winnable game until we are down 17 in the 3rd quarter
Refs got so used to calling phantom fouls they forgot how to call obvious ones
They are fighting for this win. Gotta give them that. The refs I mean.
7-3-2 from Jimmy on 25% shooting is unacceptable. IDC if he goes fucking ham in the 4th Q. Game’s 48 mins
Celtics committing murder on Dragic and the refs are in on it
Our max player feeling dangerous tonight
6 points 🔥🔥
I'm straight up not having a good time rn
You guys are soo cynical, must be the dolphins portion of this sub
Surprisingly, the Heat fans were mostly very level headed on this one so there wasn't a lot to go on. Hopefully we can observe the salt levels increasing with each of the next 3 wins in a row, right Celts fans? ;)
Follow me on Twitter for more! @Serendiptious or come see me on Instagram serendipity_maybe