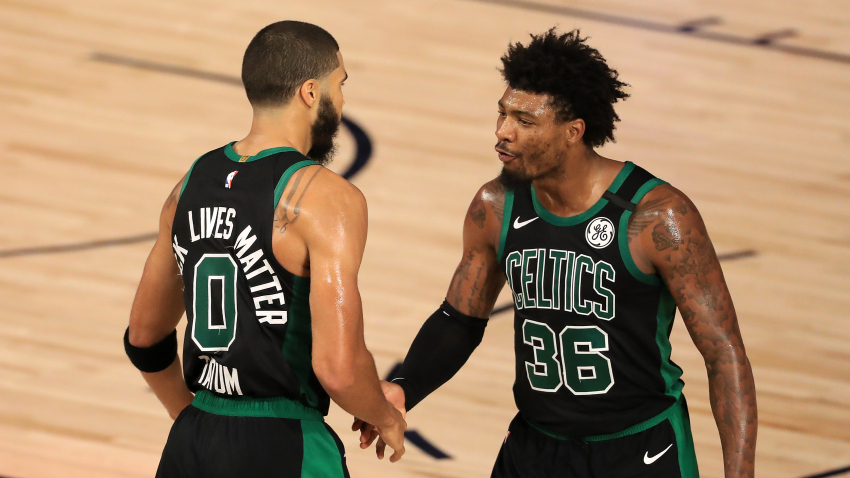 The Boston Celtics pulled out a massive 102-99 win in game 2 of their Eastern Conference Semis matchup with Toronto. This came in large part due to the stellar 3-point shooting from Larry Bird… err, I mean Marcus Smart who caught fire in the 4th quarter. With this win they take a commanding 2-0 lead in the series, although they still have plenty of work to do. The game had its ups and downs, and with it there’s a lot the Celtics have to work with going into game 3.

The strides that Marcus has made as a shooter have been so crucial to the overall performance of this team. He came into this league as a defensive stopper but lacked a good shooting touch. In this Toronto series he is currently shooting 11 for 20 (55%) from 3 with 6 of those coming tonight. 5 of his 6 made threes came in the 4th quarter of this crucial game 2, bringing the Celtics out of 7-point hole and giving them a 1-point lead. Many Celtics fans cringe every time they see Smart pull up from three, but he has an uncanny ability to shoot lights out in the clutch which he showed tonight.

Beyond this he also provided much of his usual Marcus energy. He was hustling up and down the court and he finished with 2 blocks, one of them coming on Siakam with just a 3-point lead and 35 seconds left in the fourth. He came maybe just an inch short of making a miraculous save on the play to get the ball back inbounds to Jaylen Brown, but Siakam ended up turning the ball over on the inbound anyways. Thanks to Smart’s quick hands the Celtics were able to hold onto their 3-point lead and close out the final seconds of play.

Marcus Smart: “I believe in myself. I always have, always will.”
— Boston Celtics (@celtics) September 2, 2020

The Celtics only managed to put up 102 points against the tough Toronto defense. They shot a slightly below average 42.1% from the field, that number being that high thanks in large part to Tatum, Smart and Rob Williams. Beyond that Jaylen and Kemba both had rough games shooting 38.5% and 33.3% respectively. Jaylen went 5 for 13 and Kemba 6 of 18, being 2-14 before the 4th quarter. Kemba was finally able to pull himself together after moving to an off-ball position on offense (including another nasty game winning stepback in the 4th) but in future games we’ll need both him and Jaylen to be able to make shots more consistently throughout the game.

(Even though this is a negative point here’s a quick look at that stepback, just because it was so great:)

This Kemba cross was nasty 😳

Despite the rough shooting night spirits were incredibly high all game, and the post-game interviews were full of praise for and from the whole team.

Brad Stevens: “Marcus Smart has been a winning player since he’s gotten here. We’ve been in the Playoffs every year since he’s been here and that’s not a coincidence.”
— Boston Celtics (@celtics) September 2, 2020

This team is in a much better place chemistry wise than last year, and that’s in big part thanks to Kemba Walker. His smile is contagious and he’s always supporting his teammates.

Over the course of the season it seems as though Kemba has always taken the blame in losses and deflected the praise in wins, something that is very refreshing for Celtics fans (and having the supporting cast seems to be quite refreshing for Kemba).

Kemba: “Everybody knows what I've been through. … A lot of times in my career, games like that, probably would have been a blowout for my team. For me to have these guys who can step up … it’s special.”
— Chris Forsberg (@ChrisForsberg_) September 2, 2020

The bench has also been incredibly active on the sidelines, something that’s been really important with the lack of real fans in the stadium. Even the guys like Kanter and Porier who aren’t getting minutes continue to support the team through everything.

Bad: Too many turnovers

The game was rather sloppy for the Celtics, turning over the ball a total of 17 times this game. Even worse, the Raptors, the best team in the league in points off turnovers, were able to turn those 17 turnovers into 25 points. Boston has been trying to push the pace, but in doing so they are giving up the ball. Two of those turnovers came in the form of charges late in the game, one from each Jay. The team needs to be able to level their heads and keep under control while making the simple passes.

Robert Williams and Grant Williams played 17 and 18 minutes respectively, and both had some great production in their roles. Robert Williams shot a perfect 5-5 from the field and finished the game with 11 points, 4 rebounds, 1 block, and surprisingly only 2 fouls. He brought great energy as you can probably tell from this massive put back slam:

Grant only went 1-2 finishing with 2 points, 4 rebounds, and 2 assists, although the stats don’t tell the whole story. Grant was very active defensively, playing great defense on Pascal Siakam and helping on rotations.

Brad Stevens kept a tight ship in this game, although I don’t know how much of that was by choice. Robert and Grant Williams were the only two bench players who played a considerable number of minutes and were able to produce. The only other two bench players who cracked the lineup were Semi Ojeleye and Brad Wanamaker who played a combined 18 minutes. Semi shot 0-3 and looked like he lost any and all confidence he gained in previous games. Wanamaker didn’t put up any points with a final stat line of 2 rebounds, 1 assist, 1 turnover, 1 block, and 2 fouls. Their minutes didn’t serve as much more than rest time for Kemba and the Jays, and it definitely makes game-planning a little harder on Coach Stevens.

We already know that Tatum is great, and he continues to prove it with his play in these playoffs. He finished with 8 rebounds and 6 assists to go along with his game high 34 points. With that performance he became the youngest Celtic to have three 30-point games in the postseason.

Jayson Tatum was locked in for Game 2 🔒

I’m sure many Celtics fans were dreading this game when they saw Tony Brothers was going to be officiating it, especially with stats like these:

In Nick Nurse era, @Raptors are 4-1 straight up in playoffs when Brothers is the official.
— John Ewing (@johnewing) September 1, 2020

Thankfully Celtics fans don’t have much to complain about in terms of officiating for that game (maybe with the exception of an imaginary Theis foul which gave Lowry two free throws with 2:34 left in the game and a technical called on Tatum with just over a minute remaining in the game.)

This Celtics team has proved to be incredibly resilient, having weathered several big runs from both Philadelphia and Toronto. Their confidence is growing, and they have to continue playing like it. With that being said, they need to keep cool and level heads, and need to do a better job of managing turnovers. Their defense has looked dominant, being the only playoff team to hold their opponent to under 100 points per game. On the offensive end look for Kemba and Jaylen to pick it up and lighten the load for Jayson Tatum. Hopefully Rob and Smart can continue seeing success scoring as well. The next game will be a “home” game for the Celtics on Thursday at 6:30 PM as they look to take a comfortable 3-0 lead in the series and take one step closer to getting back to the Eastern Conference Finals.