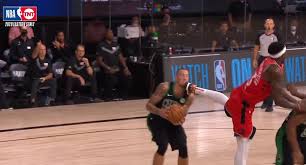 It was a purposeful contingent of Boston Celtics that recorded as many Conversions in Q2 of Monday’s Game Five against the Toronto Raptors as the defending champions could eke out in the entire First Half, harassing them into a 27 percent rate of conversion and a 27-point hole at the intermission.

In the game’s first 12 minutes, Coach Nick Nurse’s troops could muster a measly five conversions in 23 opportunities. By contrast, Boston’s “Red on Roundball”-worthy Q2 performance produced 16 “cash-ins” on 25 tries (an astounding CV% of .640).

Game, set, match – though not quite “series” (but that’s lookin’ a tad bit better than it did a day ago, I daresay).

The Raps did begin Q3 with a spurt of energy and efficiency. They matched their Q1 output of Conversions within seven possessions, shaving six points from the lead and inducing a quick Brad Stevens TO – but the Celts regrouped quickly, and Toronto wouldn’t draw so close again until the onset of Garbage Time.

In their tough Game Three loss, the C’s attempted 29 treys, 35 percent of their 83 total FGA’s – the only time this series a team launched fewer than 30 long balls or recorded a usage rate (3PAr) below .400.

During the season’s 979 pre-hiatus contests, “Team Average” took 34 three-pointers per game and posted a 3PAr of .382 (the highest seasonal rate ever). In the first round of this season’s playoffs (42 games), those numbers have risen to 37.7 per-game 3FGA’s with 3PAr at an eye-popping .433.

Nevertheless – and for the first time this series – the team with more successful treys did NOT win.

Please explain this to me –

Through four games, the Celtics had shot more accurately (.456 to .447), attempted more free throws (28-26), scored over twice as many Second-Chance points (25-11) and allowed roughly half as many opponent points off turnovers (23-40) during their two LOSSES than in their two wins ????