For the third time in four years, the Celtics are in the Eastern Conference Finals with a potential trip to the NBA Finals just four wins away. This is not the Conference Finals most fans expected but the Celtics have an extremely hard series ahead of them as they'll be going against Jimmy Butler and the Miami Heat. The Celtics have had some success this year as they have won two out of the three meetings this year with the most recent being a loss in the bubble to a Jimmy Butler-less Miami squad on August 4th. Before the tip-off at 6:30 later today, let's take a look at the match-up between the East's final two teams.
In the three games played against the Heat this year, the Celtics have three players averaging 20 or more points per game with Jaylen leading the way at 24.7 PPG followed by Tatum who has averaged 21 PPG versus Miami. The third player averaging 20 or more for Boston is a man they're expecting to make a comeback at some point in this round, Gordon Hayward. Hayward cleared quarantine in the bubble Friday shortly before their game 7 match-up against Toronto. The Celtics' forward has been ruled out for Game 1 but after a post-practice workout on Monday, Celtics' coach Brad Stevens said the 10-year forward from Butler looked good but unsure of when Hayward will be back on the floor with his team. A return from Hayward will be huge for the Celtics this series. It will take a load off of the Jays who will have tough match-ups all series long with the wings that the Heat will have playing against them. With players like Iggy, Butler, Bam and our old friend Jae Crowder playing for the Heat, it's going to be a huge test for our young star.

Containing Bam Adebayo, who has made his first career all-star game earlier this year is going to be quite the task. A powerful force down low who has been averaging 16.2 PPG to go along with 11.7 RPG is not an easy person to stop and it’s going to take a group effort between Theis, Williams, and Kanter. Robert Williams, also known as Timelord, is my pick to really step it up this series. He had some solid minutes when he was put in to the games throughout the series and he came up extremely big in Game 7 with his performance as Theis was in some foul trouble. It won’t be easy to stop Bam but look for Brad to give Timelord some key minutes throughout the series. 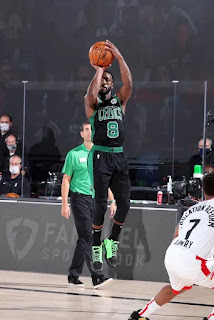 For the first time in his career, Kemba Walker is going to play in the Eastern Conference Finals. Kemba has been big for the Celtics all season and is very deserving of playing in this big series but has been struggling recently. He has had some tough games in the postseason including a dreadful 5-point performance in the game 6 loss against Toronto. Although he hasn’t been shooting the ball great as of late, he has been coming through with some big shots in the 4th quarter and is going to be an extremely important piece in this series if the Celtics want to be playing for the Larry O’Brien Trophy.
The biggest match-up for me during this series, will be the Celtics versus the shooters of the Miami Heat. Miami is a team that is big on hitting the three-ball while the Celtics on the other hand are big on defending the three. Miami has some excellent shooters and it’ll be a battle every play for the Celtics defenders to stay with these shooters, fight through the screens, and contest shots from allowing these shooters from getting the looks they want. They need to keep players like Dragic, Herro, and Duncan Robinson uncomfortable and try not to let them get in rhythm because they will be sure to make you pay once you let them. With a trip to the NBA Finals on the line, this is going to be a feisty and intense series that you should be sure not to miss.