Alternate reality hypothetical: How good would the Celtics be with prime, never injured, All-NBA Isaiah Thomas? 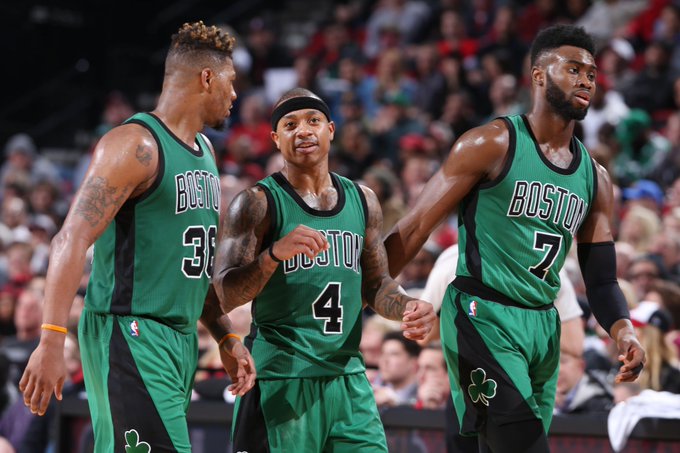 
As we wait for the tip-off of Game 4 tonight, here's a hypothetical water cooler question (back when people roamed offices and used water coolers)...
Isaiah Thomas led the Celtics to the Eastern Conference Finals in 2017 on a busted hip and without much help at all. The Celtics then drafted Jayson Tatum that June and signed Gordon Hayward a week or two later. In an alternate universe where IT4 never gets hurt, how good would the Celtics be with prime All-NBA Thomas and this much improved 2020 roster?
Note that this year's Celtics team has three players who averaged over 20 points a game plus Hayward who put up 18 a night. Isiah averaged 29 a night and not other Celtic cracked 17. IT only averaged 23 in the playoffs playing on his bad hip and still no other Celtic put up 17ppg. Credit to Brad Stevens and that squad for making it all the way to the ECF.
So again in this hypothetical universe we're talking about you have a completely healthy Isaiah. You can look at it as you're adding Jayson Tatum, Gordon Hayward, and a much improved Jaylen Brown and Marcus Smart to the 2017 IT and the Celtics. Or which is probably easier, just swap 2017 IT (prior to his injury) onto this team instead of Kemba Walker.
Here are some arguments for and against. First the former: The Celtics would have no problem scoring a basket whenever needed. Blowing leads would likely be a non-issue. You'd have a straight assassin in the 4th quarter. What Jamal Murray is doing in Denver on the western side of the bubble, Thomas would be doing for Boston. And teams through all they could at Isaiah and he still averaged 29 a night. With additional weapons like Tatum, Hayward (and a better Brown and Smart), you couldn't double or triple team Isaiah nearly as much. Not sure if traps would work against IT. The rest of the Celtics would have more open looks as well.
In terms of cons, yes our defense would be worse, but it's not like Kemba isn't a liability on that end as well. But again yes we'd be worse on that side of the ball. Likely the biggest potential con is would there be enough shots for the Tatum, Brown, Hayward, and Smart with Isaiah around? Kemba has been willing to take less shots with more talent around. Is it safe to assume Isaiah would have as well?
To answer my own question, regardless of if Isaiah would have stunted some of the Jay's offensive growth, I do think in this alternate reality where Isaiah never injures his hip the Celtics would be even better. They'd be the favorites to win the title. People talk about how they feel bad that Thomas didn't get his brinks truck, but trust me he made many more millions in his career than you and I will ever make. What is a pity is prime IT never had the supporting cast to go for a championship. I mean Amir Johnson started 77 games on that 2017 Celtics team.
p.s. Before anyone goes there. I really like Kemba on this team and this is nothing against him. Just a hypothetical about IT4. feel the need to sometimes put disclaimers on posts, though I will say our website readers tend to get less triggered than our social media followers. Thank you for that.