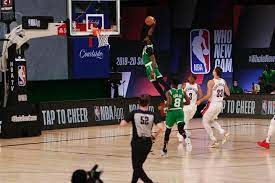 Long-time Portland bench leader Terry Stotts would appear to be the only NBA head coach to apply a playoff mentality to the “Seeding Games” from the get-go – through two down-to-the-wire games (including Friday’s OT victory over Memphis), he’s limited his playing rotation to just eight players and ridden his dynamic backcourt of Damian Lillard and CJ McCollum for 176 out of a possible 202 minutes. [Rockets’ mentor Mike D’Antoni gets an old-school honorable mention for using four guys for 40+ minutes in their OT opener with the Mavs.]

The blazing comeback of Stotts’s Ironmen fell a bit short in large part due to the red-hot three-point shooting of Brad Stevens’s “Jay Team” – the youngsters converted 11 of 16 treys (compared to eight-for-21 from the Portland guards). Jaylen Brown’s 16 Q4 points resulted from perfect (6-for-6) shooting including four 3-balls – JB also led the team in rebounds during that final 12 minutes.

For the second time in a row, Boston yielded an unacceptable 22 points off Turnovers … and perhaps surprisingly, for the second game in a row, the C’s won the battle of Second-chance Points (15-10 despite Portland’s +3 in Offensive Rebounds). 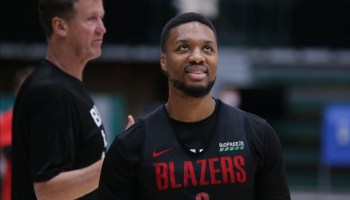 Terry Stotts is the only NBA coach for whom Damian Lillard has ever played – they both arrived in the Pacific Northwest for the 2012-13 season – Coach coming off a four-year stint as an assistant to Rick Carlisle in Dallas, Dame as the No. 6 pick in the draft.

This tandem is attempting to qualify for the post-season for the seventh consecutive season – I wouldn’t bet against them.