Gordon Hayward explains why he chose to put education reform on the back of his jersey: pic.twitter.com/FbOycb0nVv
— Nicole Yang (@nicolecyang) August 4, 2020

Last week the Celtics unveiled their Black Lives Matter jersey slogans and almost immediately social media was abuzz with criticism for Gordon Hayward. While ten other NBA players also chose education reform and all of them were Black, it didn't stop Gordon Hayward from trending on Twitter for all the wrong ugly reasons.

Hayward has always been big on education, so like CJ McCollum, the Morris brothers, DeMar Derozan, Kyle Lowry, etc, it was a natural choice for Gordon. Hayward obviously didn't owe the social media mob an explanation, but nice to hear his words on the mater regardless. 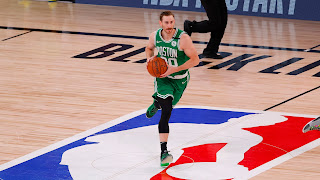 Related: Gordon Hayward trends and is called racist due to choosing 'Education Reform' as his jersey message