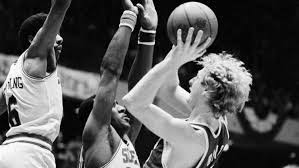 One of the few "brass rings" to elude Celtic legend Dave Cowens during his decade playing on the parquet was the taste of a victory over the rival 76ers in a playoff series. Despite a valiant 27-rebound effort in Game Seven, Big Red's re-vamped defending champions came up short in the 1977 playoffs to the Sixer squad whose "tragic fall" helped inspire Halberstam's iconic Breaks of the Game.

Dave's only other post-season shot at Philly was in the Eastern Conference Final during the Birdman's rookie campaign, the aging Cowens delivering 40 minutes per game to a "one-to-grow-on" Gentlemen's Sweep. 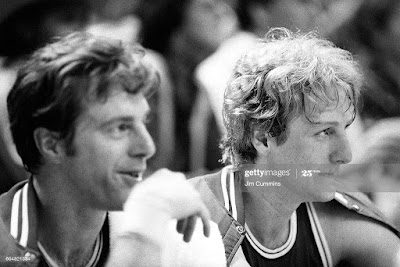 Cowens reported to training camp in 1980, but opted to retire during the exhibition season. Dave spoke briefly to the crowd during halftime of an early-season home game ... and correctly dubbed the new-look Celtics a championship team.

After an up-and-down start of their own, Bill Fitch’s elongated version of the Boston Celtics began a stretch--fittingly on Larry Bird’s 24th birthday--of 25 wins in 26 games, culminated by a defeat of the Sixers on January 28 that nudged Philly out of first place for the first time since October.

Robert Parish had found a good rhythm with his new teammates, and the rust from Tiny Archibald’s pre-season holdout had worn off.

For their part, the Sixers were drawing comparisons to their legendary 1967 predecessors, right down to an injury to a veteran guard (Doug Collins) opening the door for a young hotshot (Andrew Toney).

Though the teams would finish with identical 62-20 records, a playoff bye and home-court advantage throughout the playoffs was on the line as the teams squared off in Game 82 at the Boston Garden, a 98-94 Celtic triumph.

For the second consecutive year, Philly immediately stole the home-court advantage, Toney draining the winning free throws after a bad Cedric Maxwell foul. The lead had changed hands four times in the final half-minute after Boston had rallied from a late nine-point deficit.

Due primarily to the unconscious 14-for-21 shooting of Bird, the series was evened the following night, despite another Toney offensive explosion. 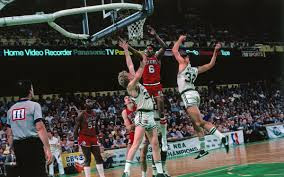 The Sixer trouncing proceeded apace through the first half of Game Four, but Chris Ford, Parish and Bird led a furious third-quarter Celtic climb out of an 18-point hole. In the game’s waning seconds with Philly up by two, Archibald uncorked a perfect lead pass to Bird. Except a speeding Bobby Jones, whose missed shot had begun the sequence, jumped the route, intercepted the pass, and sent Boston to its eleventh consecutive setback on a Philly floor.

The 76ers took to the Spectrum floor for the game Dr. J. had deemed their Game Seven with a purpose, building a lead that peaked at 35-18. Boston fought but floundered until the fight spilled literally into the stands early in the third quarter, Maxwell scuffling with a fan. The inspirited visitors clawed all the way back, and a Kevin McHale rejection of Andrew Toney with 14 seconds to go ensured the sports fan’s savoriest sweet, two old rivals in an ultimate game. 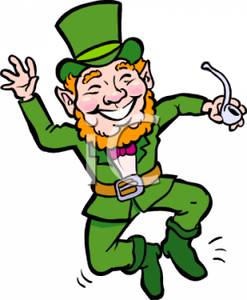 The finale followed the familiar pattern of thrusts and parries.

The Sixers would score exactly one more point in their 1980-81 season. Ultimately, Bird rebounded a wild Darryl Dawkins miss, took it the length of the floor, and banked in the series winner with just over a minute remaining.

Mo Cheeks could convert only one of two potentially game-tying free throws at the 29 second mark, but…

The Bird wasn’t letting this one get away.

The 76ers now four-year-old debt to their fans remained unpaid.