BREAKING: Brad Stevens and the Boston Celtics agree to a contract extension 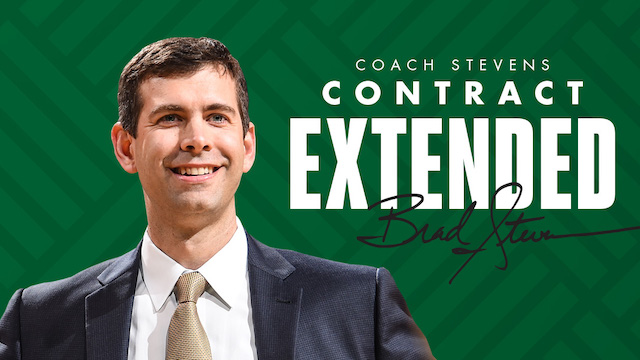 Here is the official press release:

The Boston Celtics have signed head coach Brad Stevens to a contract extension, the team announced today. Per team policy, terms of the deal were not disclosed.

“Brad is an accomplished coach and an outstanding person,” said Boston Celtics Lead Owner and Governor Wyc Grousbeck. “We are proud to have him lead our team forward in our quest for Banner 18.”

“We are thrilled that Brad Stevens will continue to be our coach,” said Boston Celtics Co-Owner Steve Pagliuca. “He has become one of the best coaches in the NBA, and is a real leader on and off the court. This is a great day for the Boston Celtics.”

“Brad is one of the most intelligent and hard-working coaches in the game today,” said Boston Celtics President of Basketball Operations Danny Ainge. “More importantly, his character and integrity have contributed to a culture that we all highly value here. Brad is a great teammate, and a leader people want to follow. We are honored to have him with us as we continue to pursue our next championship.”

With Stevens at the helm, the Celtics are poised for their sixth consecutive playoff appearance in 2019-20, marking the franchise’s longest such streak since doing so from 2007-08 to 2012-13. Stevens helped guide the Celtics to back-to-back trips to the Eastern Conference Finals in 2016-17 and 2017-18, marking the first time since the 1986-87 and 1987-88 seasons that the organization has reached the Conference Finals in consecutive seasons.

Stevens, 43, has been named the Eastern Conference Coach of the Month three times in his seven seasons with the Celtics, making him one of two coaches to earn three such honors with the franchise. The Zionsville, Indiana native also served as the head coach of the Eastern Conference All-Star team for the 2017 NBA All-Star Game in New Orleans, Louisiana, to become the seventh coach in franchise history to hold such a role (Auerbach, Fitch, Ford, Heinsohn, Jones, Rivers).

Currently in his seventh campaign with the Celtics, Stevens has notched multiple milestones during the 2019-20 season. He became just the fifth coach in franchise history to reach the 300-win mark with a victory at Orlando on January 24, and surpassed K.C. Jones (308 wins) for the fourth-most wins on the franchise ledger with a victory at Minnesota on February 21.

This is great news. Brad Stevens has overachieved everywhere he's coached and while some fans get frustrated with him, I've never seen a coach that no fans complain about. Usually it's about playing young players before their time and before they've earned it. Doc Rivers got the same criticism. Stevens' only blemish was last season, but show me a team that has won with Kyrie Irving as their best player and leader. It's never happened. I give Stevens a mulligan for last season.

The threat of a big time college program luring Stevens back to the NCAA was there, so happy to see Ainge and ownership get this done now. It's a credit to the culture of the Celtics that Stevens wants to stay long term.

Celtics announce they have signed Brad Stevens to a contract extension. He likely had at least a year or two left on his current deal, so this one should take him well into the 2020s