NBA History: The rise & fall of the “Double Triple” 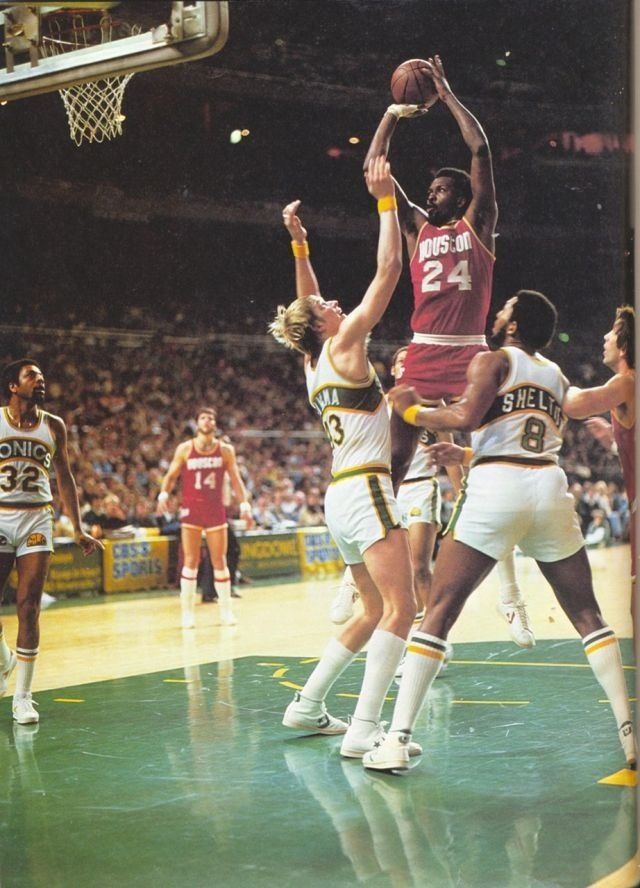 It was a typical NBA mid-February weeknight, roughly two-thirds of the way through a long season, roughly one-third of the league in action. One of the four tilts on tap for the evening featured the defending Western Conference champions hosting the team who’d won two of the prior three … it also turned out to be a preview of an up-coming playoff match-up.

But what was about to happen in Houston, though hardly unprecedented in the annals of the NBA, would not be duplicated for more than a quarter of a century (Kevin Love in 2010, then Dwight Howard in 2018).

On Feb. 11 of 1982 against the Seattle SuperSonics, the Rockets’ Moses Malone became the 18th NBA player ever to score 30 points AND collect 30 rebounds in a single game. This would be the only time in the 20-year pro career of the late Hall of Famer that he accomplished this feat. 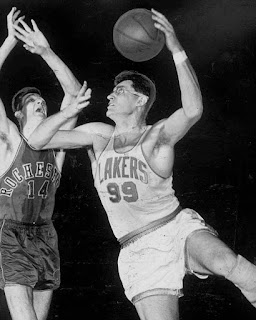 A mere 11 players own more than one such Doubly Dirty Thirty, only four men can claim as many as three. Nonetheless, it’s happened 173 times (18 of them during post-season play) in the Association’s not-quite 74 seasons – on two separate occasions (one of them a playoff clash), two different guys did it in the same game.

The inaugural season of the Basketball Association of America produced 26 scoring outputs of 30+ points, exactly half delivered by Philadelphia Warrior “Jumpin’ Joe” Fulks – alas, rebounding seems to have been deemed unworthy of tabulation until the league’s fourth season.

Hardly surprising that the first NBAer to register a Double 30 – the only player to do it prior to the adoption of the 24-second shot clock in 1954 – was Big George Mikan (twice in early 1952). The all-too-brief career of Maurice Stokes included the third occasion of such dominance five years later, while the incomparable Bill Russell notched a fourth 30-30 the following season.

More than a little surprising is that the bodacious Stat-Sheet-Stuffer walked off the floor a loser in three of those four contests … head-scratching, but true! [That inauspicious omen notwithstanding, the team with the 30-30 guy has gone 126-47 (.728) historically.]

Despite the “rap” of being limited offensively, Russell compiled seven Double Thirties over the course of his 13-season playing career, placing him No. 2 all-time – four of these monster performances were delivered under playoff pressure. [Walt Bellamy (4) and Bob Pettit (3) rank third and fourth.]

Baylor’s only other Double 30 had occurred 11 months earlier – but was also ironically matched the very same night by that future teammate from Philly. [Besides Mikan and Baylor, the others with two 30-30’s to their credit are Nate Thurmond, Jerry Lucas, Willis Reed, Kareem Abdul-Jabbar and Elvin Hayes.]

Though Russ is the only Celtic to reach the milestone, future C’s Bailey Howell (with Detroit in 1960) and Robert Parish (with GSW in 1979) are one-timers [joined by Stokes, Walter Dukes, Gus Johnson, Swen Nater, Malone, Love and Howard].

During the decade of the ‘50’s, NBA players produced 20 of these prodigious performances; in the ‘70’s that total fell to 11; and we’ve seen but three over the last four decades. 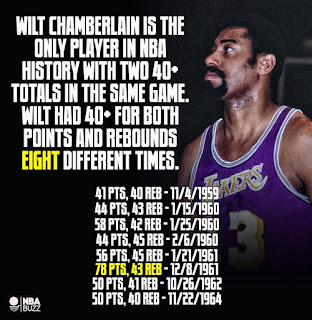 But the Turbulent 1960’s? A paltry eight players delivered 139 30-point, 30- rebound efforts … of course it helps when one member of that octet is named Wilt Chamberlain, 122 of whose 136 career Double Triples occurred during those years.

However, as unique a talent as the Big Dipper was – he’s the only player ever to post a 40-40 game, having turned that little trick eight times – there was something else at work as well.

To illustrate, let’s go back to Game 4 of the 1962 Eastern Division Final … the only post-season contest in which opposing players each reached the 30-30 plateau. Wilt’s 41 points and 34 rebounds evened the series with a 110-106 home victory, despite Russell’s 31-point, 30-carom effort.

The “Pace” in this Place

[Worthy of note is that, over the last two seasons, both per-game FGA’s and Rebounds (Pace of Play, as well) have increased marginally, presumably attributable to alterations regarding the re-set of the shot clock.]

The last player to record 30 rebounds in an NBA post-season game.

Who is Wilt Chamberlain?

Could the Celtics possibly be rostering the NBA’s next 30-30 guy?