The NBA bans you, the fan, from putting #freehongkong on customized league jerseys even as they allow players to wear customized jerseys. pic.twitter.com/px9enQa1qk
— Clay Travis (@ClayTravis) July 13, 2020 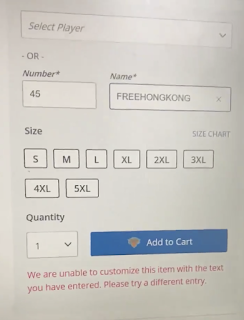 The NBA is in some hot water for reportedly banning ‘FREEHONGKONG' from its customized jersey shop. This oif course comes after the NBA received criticism last Fall for basically throwing Rockets GM Daryl Morey under the bus after China protested his Free Hong Kong tweet. The NBA brings in a ton of money from China, but even with the league muzzling Morey, China still banned NBA basketball from its airwaves costing the NBA billions.


This is juxtaposed with the NBA's recent announcement that they will allow players to wear customized jerseys from a lengthy list of social justice slogans. That decision was reached in negotiations with the players union, following protests by many players after the murder of George Floyd. Jaylen Brown was one of the players who was not happy with the list following the announcement.

The NBA of course is a business. And it's owners as well as players want to make as much money as possible. Standing up for Black lives and racial equality doesn't hurt the pockets of said owners and players. But standing up for human rights for the people of Hong Kong does hurt the bottom line and apparently it's such a no-go topic that they put a filter in customized fan jerseys. Not a great look. Makes the league look like they only care about social justice if it's a cause that can either make the league's billionaires and millionaires richer or at least won't hurt them the least bit in the pockets.

It should be noted that basically anything else is allowed on these customized fan jerseys. It's not like the NBA has strict rules regarding them. You can have profanity on the jerseys or whatever else you please. Just no support for human rights in Hong Kong please!

I'm sure Adam Silver wants the whole Daryl Morey controversy to just disappear and the league can quietly go back to just turning a blind eye to human rights violations involving China, but censoring customized fan jerseys isn't going to help the cause.

Not sure if it was the NBA's call or they were asked told by China not to allow ‘FREEHONGKONG'on the jerseys. The NBA will have to answer that question. Unless they can make sure this story doesn't get much press. I'm guessing that's the ideal scenario for them.